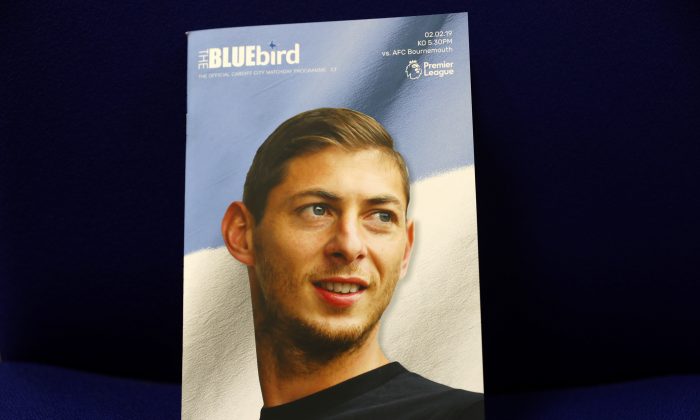 A soccer match program book with a picture of Emiliano Sala on the cover in Cardiff, United Kingdom, on Feb. 2, 2019. (Michael Steele/Getty Images)
UK

LONDON—A search team has found the wreckage of the plane that carried missing soccer player Emiliano Sala and his pilot, and a body could be seen inside, investigators said Feb. 4.

The search team, which was privately funded by Sala’s Argentinian family and a crowdfunding appeal, located the wreckage within hours, 24 miles north of Guernsey in the English Channel.

The soccer player was due to make his debut for Premier League team Cardiff City, and flew from Nantes in western France on a small Piper Malibu aircraft along with pilot David Ibbotson on Jan. 21.

It is believed that the plane crashed into the sea, but the cause of the crash is still unknown.

It has not been announced which person could be seen in the wreckage.

“The object is wreckage from the missing Piper Malibu aircraft,” Britain’s Air Accidents Investigation Branch (AAIB) said in a statement.

Once the privately funded team had located the wreckage, the AAIB took over with an underwater remotely operated vehicle, or ROV.

“Tragically, in video footage from the ROV, one occupant is visible amidst the wreckage. The AAIB is now considering the next steps, in consultation with the families of the pilot and passenger, and the police,” the AAIB added.

In the video footage from the ROV, the plane’s registration number N264DB was clearly visible.

“The image shows the rear left side of the fuselage including part of the aircraft registration,” the AAIB said. “We intend to publish an interim report within one month of the accident occurring.”

Sala’s father, Horacio, reportedly told a local Argentinian broadcaster, “I cannot believe it. This is a dream. A bad dream. I am desperate.”

David Mearns, the marine scientist hired by Sala’s family to conduct the search, found the wreckage early on the morning of Feb. 3.

Following his investigation, Mearns wrote on Twitter: “Wreckage of the plane carrying Emiliano Sala and piloted by David Ibbotson was located early this morning by the FPV Morven.”

“As agreed with the AAIB they moved the Geo Ocean III over the position we provided them to visually identify the plane by ROV.”

“The families of Emiliano Sala and David Ibbotson have been notified by police. The AAIB will be making a statement tomorrow. Tonight our sole thoughts are with the families and friends of Emiliano and David.”

The plane carrying Sala, 26, and Ibbotson, 59, disappeared from radar two weeks ago. Cushions that were believed to be from the aircraft washed up on a beach in France last week, prompting Sala’s family to begin their privately funded search.

Official searches had been called off after three days with authorities holding the opinion that there was little chance the men had survived.

Before the plane vanished, Sala was reported to have sent a voice message to his father.

“I’m in the plane and it looks like it’s going to fall apart,” Sala reportedly said. “Dad, I’m really scared.”

Sala’s last post on Instagram, meanwhile, was a photo with Nantes players with a message that translates as “the last goodbye.”