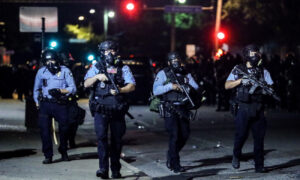 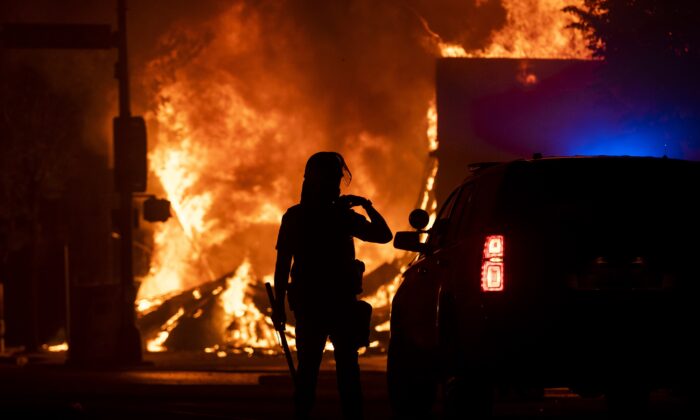 A police officer stands watch as a looted pawn shop burns behind them, in Minneapolis, Minn., on May 28, 2020. (Stephen Maturen/Getty Images)
US News

Body Found in Pawn Shop That Was Torched During Minneapolis Riots

A body was discovered in the rubble of a pawn shop that rioters burned down in the wake of George Floyd’s death in police custody.

Investigators going through the burned wreckage at Max It Pawn on Lake Street in Minneapolis found a dead body of what is believed to be an adult male.

Being that the body found in the rubble “appeared to have suffered thermal injuries,” investigators believe there is a connection between the arson and the death, John Elder, a Minneapolis police spokesman, told The Epoch Times in an email.

Minneapolis Police homicide detectives have taken over the case. The identity, along with the nature and cause of death, will be released by the Medical Examiner’s Office in the coming days.

The pawn shop was torched on May 28 amid riots in the wake of Floyd’s death. The black man died in police custody on Memorial Day after being accused of forgery.

Rioters burned down or damaged hundreds of stores in the Twin Cities.

EZCorp, the company that owns Max It Pawn, didn’t respond to a request for comment.

The shop is located several blocks from the Third Precinct, a police station that was torched after city officials ordered officers to abandon it.

Lee was captured on video pouring liquid from a metal container throughout the shop, according to charging documents (pdf).

Another video showed Lee standing in front of the burning store. After one man asks him, “What you do, Tez?” he says: “[expletive] this place. We’re gonna burn this [expletive] down.”

A third video showed a group of men, including Lee, joking about restaurants they planned to “hit” next. Another portion of that video showed looting of the pawn shop.