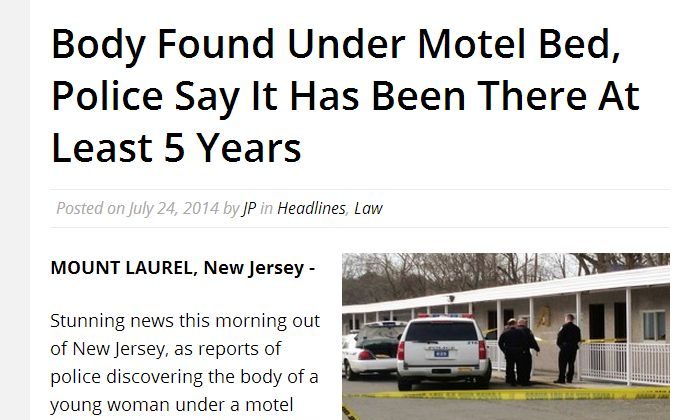 An article saying a body was discovered under a motel bed in Mount Laurel, New Jersey, that’s been there “at least five years” is fake. (Screenshot)
Social Media

Body Found Hoax: ‘Under Motel Bed, Police Say It Has Been There At Least 5 Years’ in Mount Laurel 100% Fake

An article saying a body was discovered under a motel bed in Mount Laurel, New Jersey, that’s been there “at least five years” is fake.

The bogus report was published on Empire News, which describes itself as a satirical publication.

“Stunning news this morning out of New Jersey, as reports of police discovering the body of a young woman under a motel bed have been confirmed. The owners of the motel asked that their name and location be omitted from news reports to protect their business,” the article reads. It adds: “According to initial reports by the medical examiner on-scene, it appears as though the body lay undisturbed in the room for about 5 years. There was a normal amount of rot and decay on the body to suggest that it had not been moved or touched over the course of that time.”

According to its disclaimer, Empire News says it should not be taken seriously.

“Empire News is a satirical and entertainment website. We only use invented names in all our stories, except in cases when public figures are being satirized. Any other use of real names is accidental and coincidental,” it says.

But on social media sites, a number of people apparently believed the satire article. It had about 30,000 shares and “likes” on Facebook as of Friday.

“Over 1000 complaints and the manager says to use more Fabreeze. And the owners want the Police to protect their name….how bizarre is that?” one person wrote on Facebook.

Said another, “The public has a right to know what motel this is so that they can avoid it. Clearly the owners are dirt bags that don’t enforce proper cleaning and pay no attention to complaints. We should be informed.”

Added another: “Omg that’s just gross, that place must be a real dump, the smell alone should have made someone try to find out where it was coming from. 5 years and never even looked or cleaned under the bed? Nasty place.”