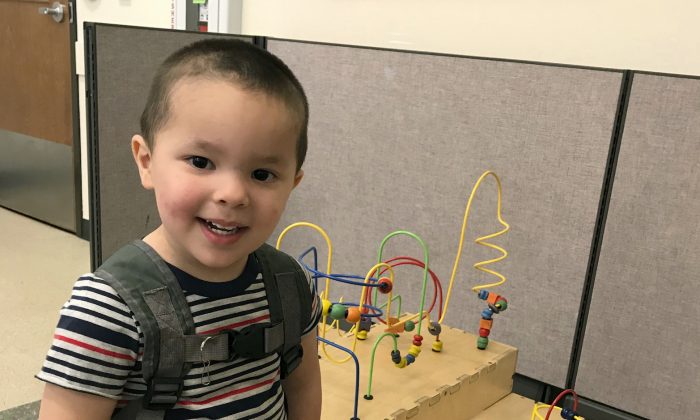 This undated photo provided by the FBI shows 2-year-old Aiden Salcido, who authorities were searching for in Montana. Police in Medford, Oregon, on, July 28, 2019. (FBI via AP)
US News

Body Believed to Be of Missing 2-Year-Old Aiden Salcido Found in Montana: FBI

Searchers in Montana said they believe they have discovered the remains of a 2-year-old missing Oregon boy whose parents died in an alleged murder-suicide.

Aiden Castiel Salcido’s body was found in a remote section of Montana on July 28, according to reports. He is the son of Daniel Salcido and Hannah Janiak, who were found dead in Kalispell, Montana, Fox News reported.

The FBI’s office in Portland, Oregon, in an update at around 6 p.m. on Sunday, wrote on Twitter about the finding.

“We want to share with you that Montana authorities have found what is believed to be the remains of the missing Medford, Oregon, 2-year-old, Aiden Salcido. Thank you to all who shared in the search. Please keep Aiden’s family & friends in your thoughts,” the office said.

The family formerly lived in Medford, Oregon. Witnesses said they saw the boy’s parents in the same area in Montana.

The bodies of Salcido and Janiak were found in their car on July 25 following a police chase, the broadcaster reported. According to Fox, they had felony burglary warrants for their arrest.

Officials found the woman died of a gunshot wound to her head. Salcido was found dead with a self-inflicted gunshot wound, the FBI told Fox.

The boy wasn’t found in the SUV, Fox reported. Meanwhile, it isn’t clear how the boy died.

We want to share with you that Montana authorities have found what is believed to be the remains of the missing Medford, Oregon, 2-year-old, Aiden Salcido. Thank you to all who shared in the search. Please keep Aiden’s family & friends in your thoughts… pic.twitter.com/UmguMrbAzy

In recent surveillance footage on July 25, Salcido and Janiak were seen, but Aiden was not, said investigators.

When she failed to show up, felony warrants were issued for the couple’s arrest.

Relatives described Janiak to law enforcement as a good mother who had mental health issues. Relatives also told law enforcement that the family was homeless and would camp along a greenway in Medford.

Investigators searched Janiak’s financial records and found that the last activity was on June 3 and June 4, when two purchases were made at a Walmart in Medford, the FBI said. The purchases of camping equipment were caught on surveillance video, which showed the parents and Aiden together.