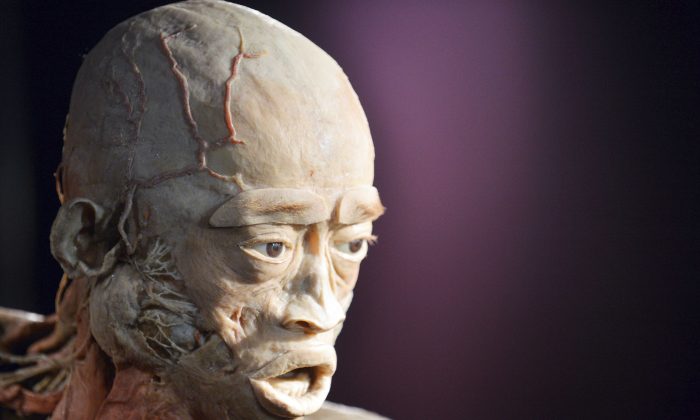 Plastination, used for the cadavers in the Real Bodies exhibition, is the process of using liquid silicone rubber to prevent the natural body process of decaying. The cadaver above is from a previous exhibition called 'The Human Body' in Kiev, Ukraine and is a file photo. (Sergei Supinsky/AFP/Getty Images)
UK

Bodies Used for UK Exhibition Could Come From Prisoners of Conscience

LONDON—The human cadavers on display at an exhibition center in the UK could have once been prisoners of conscience from China, a human rights group is arguing.

In an open letter sent to the British government, over 30 medical professionals, lawmakers, and activists called for the Real Bodies exhibition at the NEC in Birmingham to be shut down and investigated.

The exhibition features 20 cadavers and over 200 organs sourced from China and is billed as an “educational experience with multi-layered narratives” by organizers Imagine Exhibitions.

The bodies have been supplied by Dalian Hoffen Bio-Technique Co. Ltd. and are preserved using plastination, which uses liquid silicone rubber to prevent decay.

But the open letter, which is signed by prominent lawmaker Fiona Bruce, alleges that the bodies have no documentation to confirm their origin and are likely to have been sourced from prisoners of conscience.

The letter said that investigations have shown that bodies from the Dalian plastination facility include political prisoners detained in the labor camp close to the facility. Of these, many would be from the Falun Gong spiritual practice, since they are the largest group of prisoners of conscience in China.

The National Exhibition Centre (NEC) in Birmingham, which is hosting the Real Bodies exhibition until Aug. 19, says that the specimens on display “are all unclaimed bodies that have been donated by the relevant authorities to medical universities in China. The specimens featured in the exhibition were donated legally, were never prisoners of any kind, showed no signs of trauma or injury, were free of infectious disease, and died of natural causes.”

However, Tom Zaller, chief executive of Imagine Exhibitions admitted in April that there was “no documentation” to prove the bodies’ identities or that they had consented to donating their bodies after death.

The UK’s Human Tissue Act (2004) says that “removing, storing, or using human tissue … without appropriate consent” is an offense, but because the Real Bodies’ specimens have been imported from overseas the Act does not apply.

Lord Alton of Liverpool, a signatory of the open letter, asked parliament whether the Birmingham coroner could investigate the origins of the cadavers’ deaths.

Rachel Dunachie from the NEC said that if the exhibition was found to be unethical they would “take guidance from the Human Tissues Authority” who “wouldn’t give us a license.”

Birmingham coroner’s office saw a copy of the open letter but decided not to take any action, according to the BBC. The coroner’s office was contacted by The Epoch Times as to the reasons why, but did not respond in time for publication.

Plastinated body exhibitions have been banned in Israel, France, Hawaii, and some cities in the United States. The Czech Republic changed its laws on July 7, 2017, to require proof of consent from the deceased before such exhibitions are allowed to enter the country.

Ethan Gutmann, investigative journalist and co-founder of the International Coalition to End Transplant Abuse in China, is calling for DNA samples from the bodies so their origin can be established.

“China is right now pursuing a policy of trying to test the DNA of living Chinese people,” Gutmann said at an event to launch the open letter. “They’ve already tested 17 million Uyghur Muslims and they can narrow it down to within third-degree relatives so it’s becoming possible to get a match.”

Gutmann believes if the DNA sampling is granted it could “explode open” the issue of organ harvesting from prisoners of conscience—a subject the author has campaigned on for over a decade.

This is because Dalian, where the plastination is carried out, is the second largest city in Liaoning Province, an epicenter for the persecution of Falun Gong practitioners, according to Gutmann.