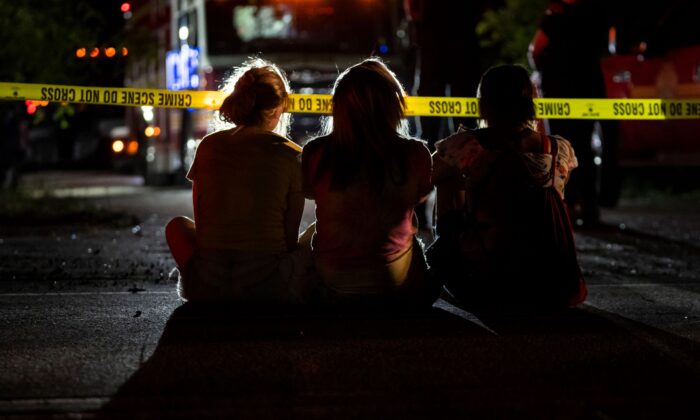 Family and friends watch as Indianapolis Metropolitan Police Department investigators search for a father and three children on Bluff Road in Ind., on July 12, 2022. (Grace Hollars/The Indianapolis Star via AP)
Crime and Incidents

INDIANAPOLIS—The bodies of a man and his three young children who vanished last week after leaving for a fishing trip were found along with a submerged car in the pond where they were headed, authorities said Wednesday.

The bodies discovered Tuesday night are those of Kyle Moorman, 27, of Indianapolis, and his children: 1-year-old Kyran Holland, 2-year-old Kyannah Holland, and 5-year-old Kyle Moorman II, the Marion County Coroner’s Office confirmed. The causes and manners of their deaths were pending.

The family went missing after leaving on July 6 to go to the pond on Indianapolis’ south side.

Officers went to the pond Tuesday night after a report of a dead person in the water. A man was pronounced dead, and a dive team later found a vehicle with the bodies of three children inside, police said.

“Detectives are working to piece together what led up to this incident,” police said in a statement.

Family and friends of the Moormans had offered a $10,000 reward for information leading to their whereabouts. They had searched the pond and the surrounding area for days. A private helicopter and volunteers with a personal boat also searched Tuesday, The Indianapolis Star reported.

Moorman’s sister Mariah Moorman had said her brother’s phone last pinged near the pond about 12:40 a.m. on July 7, a few hours after he was seen. She said her brother often goes night fishing.

“As far as we know, he was coming out here to go fishing,” she told The Indianapolis Star on Monday. “That’s what he told my sister. It’s not odd. He does it all the time.”

The Indianapolis Metropolitan Police Department first revealed that the family had disappeared on Sunday. Earlier this week, police said officers searched the area and other locations on foot and using drones.

William Muse, a relative of Kyle Moorman’s mother, said Tuesday he and other family members were frustrated investigators didn’t search the pond sooner.

“They should have at least tried,” Muse said.