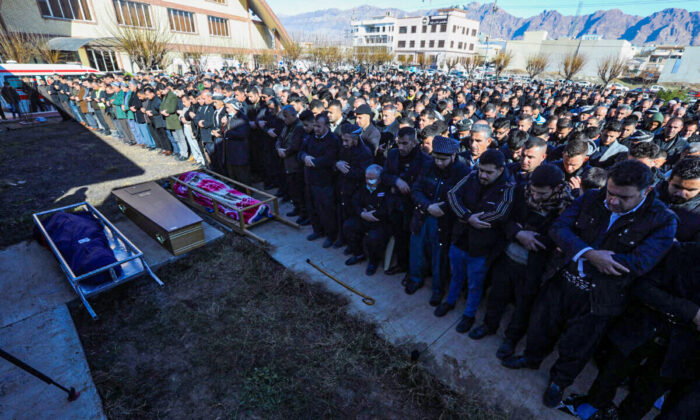 People pray next to bodies of Iraqi Kurdish migrants, who drowned while trying to cross the channel between France and Britain, in the town of Rania, Sulaimaniyah province, Iraq, on Dec. 26, 2021. (Ako Rasheed/Reuters)
Middle East

Bodies of Migrants Drowned in English Channel Returned to Iraq

At least 16 bodies of Iraqi Kurdish migrants who died trying to cross the English Channel last month have arrived in northern Iraq on Sunday.

The Nov. 24 disaster, during which 27 people died, has been described as the worst on record involving illegal immigrants trying to cross the perilous passage to Britain from France. The boat capsized off the coast of northern France, sparking a political crisis. Britain and France accused each other of not doing enough to deter people from crossing the English Channel.

The plane carrying the bodies landed on early Sunday in the airport of Erbil, the capital of Iraq’s autonomous Kurdish region. Ambulances then took the coffins to the hometowns of the deceased for burial.

“The last time I heard my son’s voice was when he got on board the boat. He said ‘Don’t worry Mum, I will reach England shortly.’ Now he’s back to me in a coffin,” said Shukriya Bakir, whose son was one of those who drowned.

The repatriations came amid new tragedies involving migrants from the Middle East trying to reach Europe. Libya’s Red Crescent said Sunday that at least 27 bodies of Europe-bound migrants, including a baby and two women, have washed ashore in the country’s west.

Greek authorities have also recovered at least 16 bodies off the island of Paros on Friday and 11 bodies off the uninhabited islet of Prasonisi on Thursday.

Overnight between Tuesday and Wednesday, another boat thought to have been carrying up to 50 migrants sank off the island of Folegandros, with dozens feared missing.

In the past decade, hundreds of thousands of illegal immigrants have slipped into the wealthy economies of Western Europe with the help of smugglers, from Iraq, Syria, Afghanistan, Yemen, Sudan, and elsewhere.

Lately, a disproportionate number of Europe-bound migrants from the Middle East have been people from Iraq’s Kurdish region. Although northern Iraq is more prosperous than the rest of the conflict-scarred country, growing unemployment and frustration over corruption have prompted many to consider the risky journey.

Tom Pursglove, a minister for both the Home Office and the Ministry of Justice, told Parliament’s Home Affairs committee last month that the Iraqis made up 18 percent of the illegal immigrants that arrived in the UK in small boats in 2019, second only to the Iranians, who made up 29 percent of 2019’s small boat arrivals.

The committee also heard that channel crossing had become very lucrative for smugglers, partly because of travel restrictions during the CCP (Chinese Communist Party) virus pandemic.