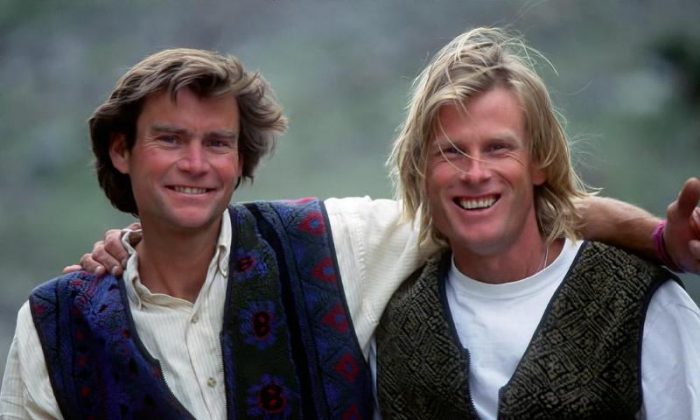 The bodies of two American climbers, Alex Lowe and David Bridges, who were buried in an avalanche 16 years ago have been found in a mountain in Tibet, announced loved ones on April 29.

Lowe, 40, a prominent climber and Bridges, 29, a climber and cinematographer, went missing on October 5, 1999, while climbing on the south face of Shishapangma in Tibet. They were filming a documentary for NBC Sports when they were buried in an avalanche.

Conrad Anker, who was climbing with Lowe and Bridges but survived with minor injuries, got a phone call on April 27 from David Goettler and Ueli Steck who were acclimatizing for an ascent in the same place the missing climbers were. According to the website of The Alex Lowe Charitable Foundation (ALCF), Goettler described the clothing and packs of the climbers to Anker who concluded that the two bodies were Bridges and Lowe.

“They were close to each other. Blue and red North Face backpacks. Yellow Koflach boots. It was all that gear from that time period. They were pretty much the only two climbers who were there,” Anker told Outside Magazine.

Anker, who married Lowe’s widow Jenni Lowe-Anker in 2001 and adopted their three sons, says the findings finally bring closure to the disappearances.

“After 16 ½years, this brings closure and relief for me and Jenni and for our family,” Anker said.

The climbers who found the remains of Lowe and Bridges said they had found the bodies still encased in blue ice but beginning to emerge from the glacier, just like Lowe’s widow predicted would happen in her memoir Forget MeNot.

“Alex and David vanished, were captured and frozen in time. Sixteen years of life has been lived and now they are found. We are thankful,” said Lowe-Anker after the bodies were found.

“Alex’s parents are thankful to know that their son’s body has been found and that Conrad, the boys, and I will make our pilgrimage to Shishapangma. It is time to put Alex to rest,” she added.

Lowe-Anker and her current husband live in Montana and run the ALCF, a foundation dedicated to preserving Lowe’s legacy by providing direction and financial support to community-based humanitarian programs designed to help people who live in remote regions of the world. The foundation honors Lowe’s adventurous spirit.

Lowe-Anker began the foundation in December of 1999 after her former husband disappeared.