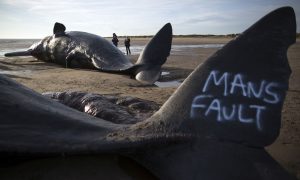 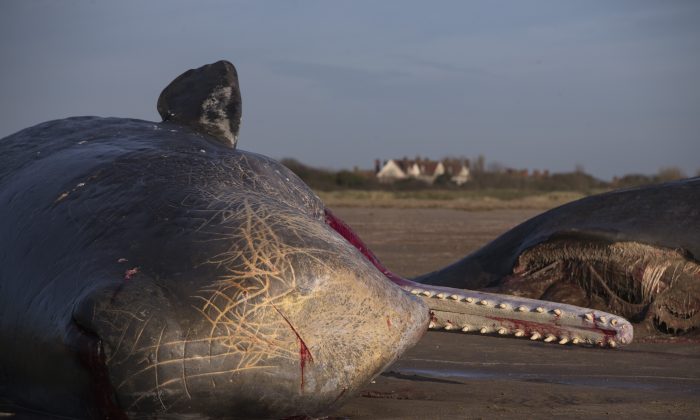 Two of the five Sperm Whales that were found washed ashore on beaches near Skegness over the weekend on January 25, 2016 in Skegness, England. (Photo by Dan Kitwood/Getty Images)
Europe

Bodies of 8 Sperm Whales Discovered in National Park in Germany

Eight gigantic sperm whales were discovered on a German beach on Feb. 1, adding to the rising death toll in the region.

The latest bodies washed up in the mudflats of a restricted area of the Wadden Sea national park, the Schleswig-Holstein regional environmental authority said in a statement.

The authority said that during migration, the animals “mistakenly wind up in the shallow and nutrient-poor North Sea,” making it harder for them to use their acoustic orientation to navigate.

The giants’ graveyard: Eight whales are washed up on German coast https://t.co/hTK8MThbLI

Without citing a specific group, it said that researchers at the University of St Andrews have found that the noise made by offshore wind farms can interfere with a whale’s sonar, and can in tragic cases see them driven onto beaches where they often die.

Sonar from submarines can also confuse or deafen whales.

On the other hand, researchers with the Zoological Society of London in Regent’s Park, who have taken the lead in studying the recent rash of deaths, say it’s unclear what’s causing the whales to enter the North Sea.

“In terms of the sperm whale events, we will have discussions with our Dutch and German colleagues,” Rob Deaville, the program’s project manager, told the Guardian.

Sperm Whales Wash up on English Beach, People Vandalize Them With Graffiti

“We’ll look at what may or may not have been going on. It may be that after months of research we are none the wiser as to what caused them to come into the North Sea in the first place. I suspect this is a strong possibility.”

After researchers take samples from the newest set of whales, the animals will be taken to nearby landfills.