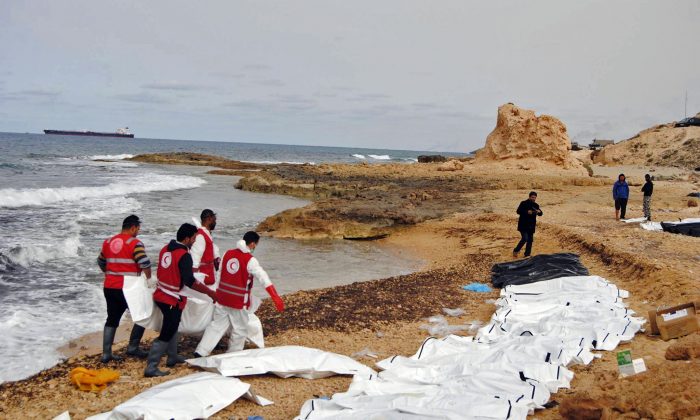 The bodies of people that washed ashore and were recovered by the Libyan Red Crescent, near Zawiya, Libya on Feb. 20, 2017. (Mohannad Karima/IFRC via AP)
International

Bodies of 74 Migrants Heading to Europe Wash up in Libya

CAIRO—At least 74 bodies of African migrants have washed ashore in western Libya, the Libyan Red Crescent said Tuesday, the latest tragedy at sea along a perilous but increasingly popular trafficking route to Europe.

The bodies were found near the western Libyan city of Zawiya on Monday, Red Crescent spokesman Mohammed al-Misrati told The Associated Press, adding that he feared more might surface. He said a torn rubber boat, the kind that usually carry up to 120 people, was found nearby.

The Red Crescent’s branch in Zawiya said there are bodies still floating out at sea but it has no means to retrieve them.

The International Organization of Migration said the traffickers took the engine and left the boat to drift. Another 12 migrants remain missing and are “presumed drowned,” and a sole survivor was transferred to a hospital in a coma, the U.N. migration agency said on Twitter.

The Red Crescent posted photographs of dozens of bodies in white and black bags, lined up along the shore. Al-Misrati said the bodies would be taken to a cemetery for unidentified people in the capital, Tripoli. The Red Crescent appealed for help on Facebook, saying there are no vehicles to transport the bodies.

Al-Misrati had initially said the bodies were found overnight Tuesday, but later clarified that they were recovered Monday afternoon and evening.

Libyan coast guard spokesman Ayoub Gassim said over 500 migrants were rescued at sea on Friday and Saturday off the coast of Sebratha, a city to the west of Zawiya. The migrants’ boats were about 5-7 miles (8-11 kilometers) from the coast.

Gassim said the smugglers pack larger rubber boats with up to 180 people, dramatically increasing the risk of capsizing.

“We are seeing the new boats, which are not equipped with anything, but they carry more people,” he said. “This is going to be even more disastrous for the migrants.”

The Libya to Italy smuggling route across the Mediterranean has seen record numbers of migrant drownings in 2016, Fabrice Leggeri, director of the European Border and Coast Guard Agency, said last week. Some 4,579 migrant deaths were documented in 2016, up from 2,869 deaths the previous year and 3,161 in 2014. The real number of deaths is believed to be much higher.

Libya was plunged into turmoil by the 2011 uprising that toppled and killed longtime dictator Moammar Gadhafi, and has since emerged as a popular, if extremely dangerous, route to Europe for those fleeing poverty and civil war elsewhere in Africa.

Libya is largely governed by local militias, many of which profit from the trafficking. Rights groups say migrants traversing Libya have been tortured, raped and subjected to forced labor.

The European Union has plans to halt the tide by training the Libyan coast guard and stepping up cooperation with neighboring Algeria, Tunisia and Egypt. But rights groups fear that such measures could leave tens of thousands of migrants stranded in the restive country.

The plan would also require a much stronger Libyan government capable of controlling the country’s waters. At present, Libya is split between two competing governments which convene in different parts of the country.

The head of Doctors Without Borders, Arjan Hehenkamp, says the EU plan shows that it is “delusional about just how dangerous the situation in Libya really is.”

His organization, also known by its French acronym MSF, has aided in the sea rescues. He said survivors have recounted starving in Libyan detention centers and other abuses.

Earlier this month, Italy reached a deal with the U.N.-brokered government in Tripoli, which is not recognized by rival authorities in the east, to train and equip the Libyan coast guard and improve conditions in detention centers.

Mohamed Siala, the foreign minister of the U.N.-backed government, told the AP that 70 coast guards have received training and a second group will follow. He denied allegations by critics that the deal would pave the way for the resettlement of migrants inside Libya.

He expressed fear, however, that the flow of migrants would increase this spring, saying rescue operations have encouraged more migrants to risk the journey.