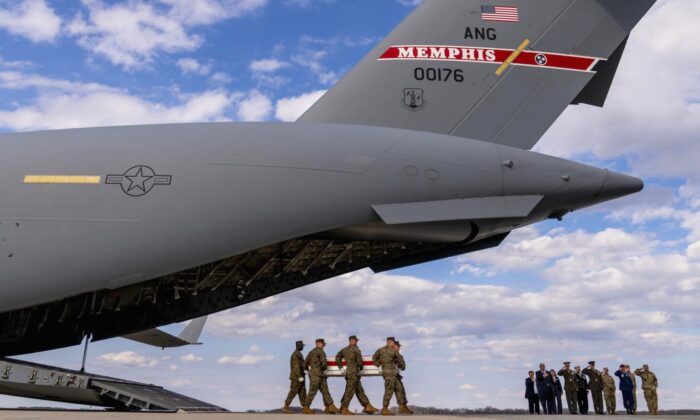 A U.S. Marine Corps carry team moves a transfer case containing the remains of Capt. Ross A. Reynolds of Leominster, Mass., during a casualty return at Dover Air Force Base on March 25, 2022. (Andrew Harnik/AP Photo)
US News

The bodies of four Marines who were killed when a military aircraft crashed during a NATO training flight in northern Norway earlier this month have been returned to the United States.

Officials said on Saturday that hundreds of Marines, sailors, service members, and civilians rendered final salutes to the fallen Marines in Bodø, Norway, over the weekend.

The bodies were then placed on board an Air National Guard military transport aircraft and flown to Dover Air Force Base in Delaware, Marine Corps officials said. The remains of the Marines will ultimately be moved to their final resting places according to their families’ wishes, officials said in a statement.

All four of the Marines were assigned to Marine Tiltrotor Squadron 261.

The cause of the crash remains under investigation, but Norwegian police reported bad weather in the area at the time.

The Marines had been taking part in a NATO military exercise called Cold Response 2022. The naval, air, and ground drills started earlier this week and involve 30,000 troops, 220 aircraft, and 50 warships. Authorities noted that the exercise was unrelated to the war in Ukraine.

“The pilots and crew were committed to accomplishing their mission and serving a cause greater than themselves,” said Maj. Gen. Michael Cederholm, the commanding general of 2nd Marine Aircraft Wing, in a letter to his Marines and their families.

According to NATO, the military drills that the plane was involved in involve “tens of thousands of troops from across Europe and North America [who] are training together in harsh climatic conditions.”

The drills are held every two years over large areas across Norway, including above the Arctic Circle, and seek to explore how Norway would manage reinforcements. Officials said they were planned long before Russia’s invasion of Ukraine on Feb. 24.