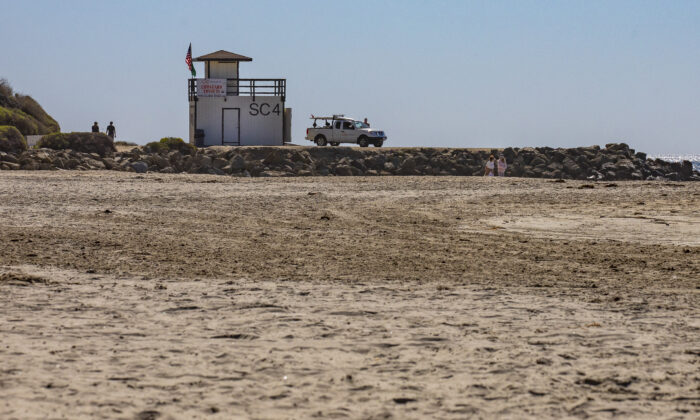 DANA POINT, Calif.—The bodies of a man and woman were found Friday morning on Salt Creek Beach in Dana Point, prompting a death investigation, but sheriff’s investigators say they do not suspect foul play.

As people walked towards the sand of Dana Point’s popular Salt Creek beach, puzzled looks appeared underneath their hats and sunglasses as Orange County Sheriff’s Department personnel chatted with the media.

The sunshine and light ocean breeze that blessed the beachgoers seemed to be out of place as they walked to the south end of the beach, unknowingly past the area where two bodies were found by Orange County Sheriff’s Department investigators at 6:50 a.m. on Friday.

“It appears to be an isolated incident and there are no security concerns,” said Sgt. Ryan Anderson, of the Orange County Sheriff’s Department.

“There are no indications of foul play at this point or suspicious circumstances.”

The bodies of a man and woman in their 50’s and 70’s were found near a tent on the sand just north of lifeguard tower 4, which overlooks the entire beach, according to the sheriff’s department.

Closure of the beach area was lifted by authorities at noon.

“I ran over here and to see what was going on,” Dana Point resident Marcy McNulty told The Epoch Times after hearing word of the incident from her neighbor.

Just outside of Salt Creek Point adjacent to the shoreline, a boat sat anchored with flags indicating that scuba divers were in the area. Surfers, families, runners, and people practicing yoga exercises were spread across the sand as the day continued on.

There were no further details released about the people found.

An investigation on the incident is underway but causes of death could take weeks to complete and release information.

Identities of the man and woman were not being immediately released as authorities were working to contact relatives.