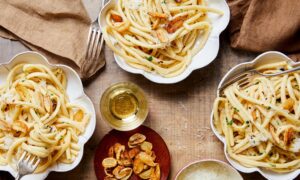 The bogus report was published on Huzlers.com, which describes itself as “satirical.”

Here’s the disclaimer (on the bottom left of the article page): “Huzlers.com is a combination of urban news and satirical entertainment to keep its visitors in a state of disbelief.”

Thousands of people were sharing the fake news article as of Friday night.

Some people on Twitter apparently thought it was real. “RIP Bobby Shmurda,” tweeted more than a few people.

A few weeks ago–before he was arrested–there was a hoax going around saying he threatened Chicago rapper Chief Keef and his affiliates. That’s also entirely fake.

In actual news, Shmurda was arrested more than a week ago by New York police, claiming he was the ringleader of the Crips GS9 gang. He was charged with conspiracy to commit murder, weapons possession, and reckless endangerment, according to The Associated Press.

He was held on $2 million bail shortly after. Shmurda pleaded not guilty and faces 8 to 25 years in prison, AP reported.

NEW YORK (AP) — An up-and-coming rapper pleaded not guilty on Thursday to charges he moonlighted as a gun-toting member of a New York City street gang responsible for several shootings during turf wars over drug trafficking.

Ackquille Pollard, who performs under the name Bobby Shmurda, was ordered held on $2 million bail at a hearing in state Supreme Court in Manhattan. His attorney, Howard Greenberg, failed to convince a judge that his client should be released without bail because he was framed and had no reason to run.

“He is a legitimate entertainer,” Greenberg said. “He is rich. He is busy. He is always on tour.”

The Brooklyn-born Pollard is best known for the hit song “Hot Boy.” He also put out a music video that popularized a dance craze called the “Shmoney dance,” and reportedly signed a lucrative record deal with Epic Records.

Greenberg claimed Epic had agreed to help Pollard make bail. A spokesman for the label declined to comment.

Police arrested Pollard on conspiracy, reckless endangerment and gun possession on Wednesday after he left a recording studio near Radio City Music Hall. Police found two handguns and a small amount of crack cocaine in a car in which he was riding, authorities said.

An indictment naming Pollard charges more than 15 defendants with a variety of crimes including murder, attempted murder, assault and drug dealing. The gang’s gun play left one rival dead, injured an innocent bystander sitting on folding chair outside a Brooklyn home and caused pandemonium outside a nightclub in Miami Beach, Florida, authorities said.