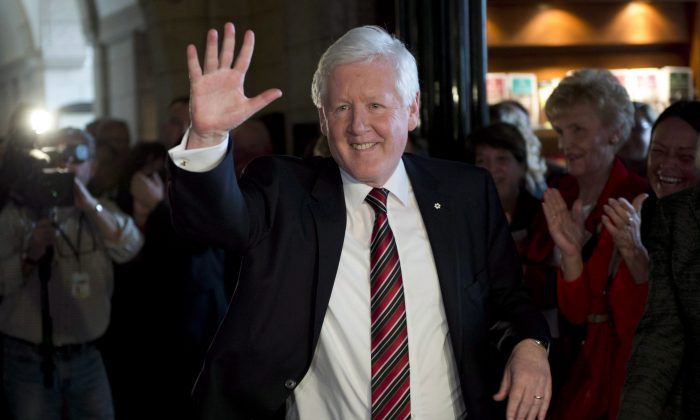 Liberal MP Bob Rae waves as he is greeted by party staff and MPs following his final caucus meeting as leader on Parliament Hill on March 27, 2013 in Ottawa. Rae, former interim Liberal leader and one-time NDP premier of Ontario, is resigning as an MP, winding up a political career that stretched over 35 years and two parties. (THE CANADIAN PRESS/Adrian Wyld)
Canada

OTTAWA—Bob Rae, a fixture on Canada’s political scene for more than three decades, is giving up his seat in the House of Commons in order to devote himself to work on behalf of First Nations in northern Ontario.

Rae said he is leaving politics so he can focus on his new role as chief negotiator for First Nations in talks with the province about development of the Ring of Fire mining development in northern Ontario.

“This is going to be a major undertaking,” an emotional Rae told a surprise news conference Wednesday in the foyer of the House of Commons.

“It’s clear to me that it will take a lot more time and it simply isn’t possible to do both jobs at the same time.”

The 64-year-old Rae’s unexpected announcement caps a political career that has spanned 35 years and two parties. It came after he privately broke the news to the Liberal caucus in what he described as a difficult moment.

“I have a passion for my work as a negotiator and for First Nations,” Rae said. “When you make a difficult choice, you show your emotions.”

“Bob Rae has served Canadians for 35 years. He deserves our full respect and I wish him and his family well,” Mulcair said.

Rae began in politics as a New Democrat and later shifted to the federal Liberals, even seeking the party leadership at one point.

He was first elected to the Commons in a 1978 byelection, but moved to Ontario provincial politics four years later, when he became provincial NDP leader and later served as premier.

In 2006, having joined the Liberals, he unsuccessfully sought the party leadership, but won a seat in the Commons in 2008, becoming interim leader after Michael Ignatieff lost his seat in the 2011 election.

Rae in recent years was a fixture in the Commons with his fiery speeches and a shock of white hair that grabbed the eye on television.

“I have a lot of passion for Canadian politics,” he said.

But the lawyer, author, and arbitrator finally found himself caught between two careers and opted for the work of conflict resolution.

He refused to speculate about his political legacy. “I don’t write history,” he said. “That’s someone else who’s going to do that.”