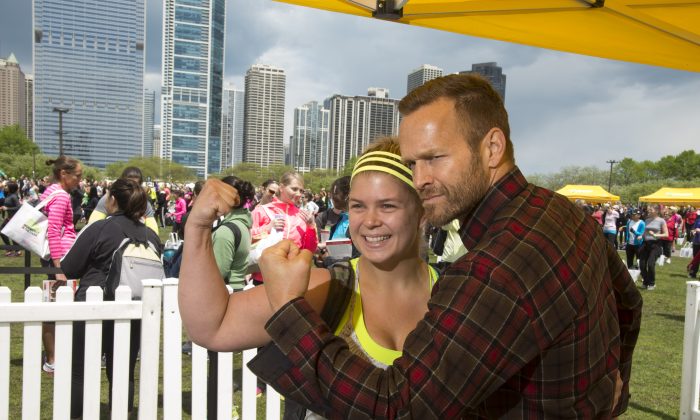 Bob Harper, trainer on "The Biggest Loser," poses with fan Alyssa Whetstone at SELF magazine's 21st annual Workout in the Park, Saturday, May 17, 2014, in Chicagos Grant Park. (Photo by Peter Barreras/Invision for SELF/AP Images)
Entertainment

Bob Harper returns as one of the trainers on NBC’s The Biggest Loser, which is premiering on Thursday night.

Harper has been with the show for all 16 seasons.

Harper, 59, is a personal trainer who has worked for a number of celebrity clients. He teaches classes in Los Angeles and also works sometimes as a yoga teacher.

Harper describes himself as a fitness expert, television star, and author on his website.

“Harper was raised on a cattle farm in Nashville, Tennessee before making his way to Los Angeles in pursuit of his dreams. It was a serendipitous meeting with a trainer that motivated Harper to get into the fitness industry. He received a fitness instructor’s certification from the American Fitness Training of Athletics Association and the Aerobic and Fitness Association of America,” it said.

“Now a decade later, Harper has developed his trademark brand of fitness and nutritional integration that leads to lasting lifestyle transformations.”

Besides his many other commitments, Harper appears on television shows such as The Dr. Oz show and The Tonight Show.

Harper has a reported net worth of $2 million.