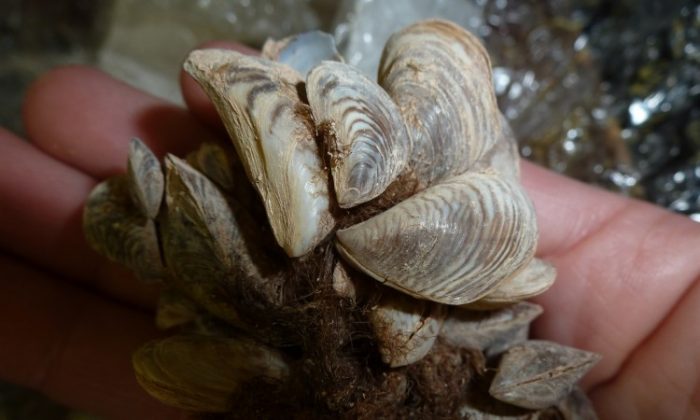 A cluster of Quagga mussels. The South Okanagan Invasive Plant Society is urging B.C. boaters to clean their vessels properly in order to prevent the spread of two invasive mussel species found in eastern Canada and the U.S. (Courtesy Lisa Scott)
US

Boaters Asked to Help Keep Invasive Mussels Out of B.C.

Boaters in British Columbia are being urged to properly clean their boats in an effort to prevent two highly invasive mussel species known to wreak havoc on ecosystems from taking hold in the province’s lakes.

Zebra and Quagga mussels are no bigger than a thumbnail, but their alarming rate of reproduction—up to one million eggs per female per year—can lead to widespread destruction.

The two species are already established in eastern Canada and the Great Lakes, and the South Okanagan Invasive Plant Society wants boaters to take precautions to stop them from spreading to B.C. and other parts of Canada.

“We’re working on educating recreational boaters to clean, drain, and dry their boats. So we’re trying to get them into a mindset where they’re automatically doing that every time they come out of a lake,” says coordinator Lisa Scott.

“There’s no known way to control [the mussels] once they move in, so the best approach is prevention.”

The mussels are filter feeders known for clogging water intake structures such as pipes and screens, and disrupting supplies of drinking and irrigation water.

Their ability to remove large amounts of plankton and suspended particles from the water limits food supplies for fish and disrupts entire ecosystems.

They can also accumulate high levels of contaminants within their tissues, which exposes other wildlife in the food chain to the pollutants, and can bring E-coli and other toxins into drinking water.

Scott says that simply cleaning and drying boats every time they are taken out of the water is enough to stop the mussels from spreading, but the biggest challenge now is to educate boaters on the importance of being vigilant.

The organization has hired a student to travel to boat launches and popular water-spots around the province to talk to boaters about the threat and implications of the mussels’ spread.

“It probably has the potential to be the most devastating invasive aquatic species if it was to invade B.C.,” she says. “By taking these simple steps, boaters can stop a whole bunch of stuff that we might not even know is out there yet.”

One of the greatest difficulties in preventing the mussels’ spread is that they are invisible in their larval stages. During this time, the free-swimming larvae can attach to any surface and be easily transported between water bodies.

Big Problem in the U.S.

Native to Eastern Europe and western Asia, Zebra and Quagga mussels are thought to have arrived in North America in 1988 via commercial ships travelling between the Atlantic Ocean and the Great Lakes. The first established population in North America came from Lake St. Clair, a water body connecting Lake Huron and Lake Erie.

The mussels have invaded many water bodies in the United States, and some states have gone to great lengths to prevent their spread, including blocking waterways or introducing legislation to improve boater responsibility.

Idaho has mandatory checkpoints across the state where all water crafts are inspected to ensure the invasive species are not present.

Last year, a total of six boats were stopped in Idaho on their way to B.C. after they were found to have the invasive mussels on or in them. This year alone, 45 contaminated boats have been found at Idaho checkpoints; six of them were headed for B.C.

“If Idaho didn’t have that mandatory inspection those boats could have ended up in British Columbia waterways and there’s a chance that mussels could have established here,” says Scott, adding that there’s the potential for many more near-misses before the summer is out.

According to the Center for Invasive Species Research at the University of California, it costs around $500 million per year to combat the pests at power plants and other water facilities in the U.S.

Scott says her organization will focus on educating recreational boaters for now, but plans to target commercial boaters in the future.