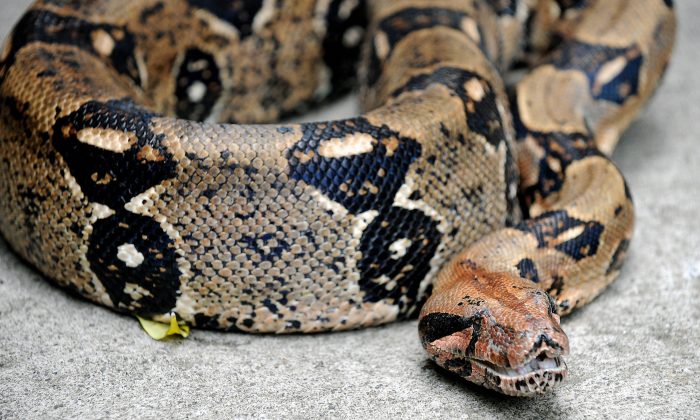 A boa constrictor (not in story) is shown in 2008 at the National Biodiversity Institute (INBIO) park in Santo Domingo de Heredia. (Yuri Cortez/AFP/Getty Images)
UK

A boa constrictor was let loose in the U.K. after a taxi driver refused to allow it in the cab, according to reports.

It was reported that the snake was thrown into a hedge in Portsmouth after a taxi after the driver refused its owner.

The owner reportedly had the snake wrapped around his neck when he got into the taxi cab, but the driver wasn’t impressed.

“All I got told was a man got picked up by a taxi and he had a snake wrapped around his neck,” groundskeeper Steve McGovern told the Portsmouth News.

“The taxi driver said ‘there’s no way, you are getting in here with that’ so he threw it in the hedge so he could still get in the taxi,” he added. “It then drove him to wherever he was going. I don’t know what to make of it.”

The man then tossed the snake into a hedge, prompting a search from police and firefighters. According to the Portsmouth News, officials are using thermal imaging to find the reptile.

Security staff have already made jokes about the snake, calling it Bernard the Boa.

Fears about boa constrictors and similar snakes have spiked in recent days after two small children in eastern Canada were found dead after a 14-foot-long, 100-pound python killed them.

The Associated Press on Monday reported that hundreds of people attended a funeral for the two small boys.

“We all try to understand the best we can, but you know, no one here can feel what you feel. But I am sure that everyone here feels for you, for what you are going through,” Rev. Maurice Frenette told the boys’ parents.