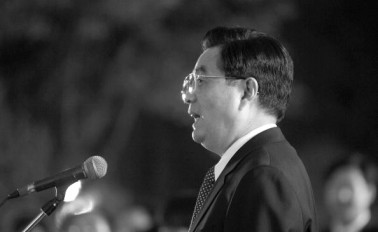 Chinese President Hu Jintao. Hu Jintao has defeated Jiang’s faction and has hung the charge of “other discipline violations” over their heads like the sword of Damocles. (Prakash Singh/AFP/Getty Images)
Chinese Regime

Zhang Tianliang
Zhang Tianliang (Shujia Gong), Ph.D. former adjunct professor of George Manson University, is dean of the Department of Liberal Arts and Science at the New York Based Feitian Academy of writes on China's history and politics. He contributes to a variety of publications, including the Arts. He is a popular columnist at the Epoch Times and senior commentator at the New York-based New Tang Dynasty Television and a guest commentator at Voice of America’s Chinese service. He is the author of China's Path to Peaceful Transition.
View profile
Follow
biggersmaller
Print

Former Party head Jiang Zemin’s faction was not able to cut ties with the disgraced Bo Xilai, and the current Party head Hu Jintao’s moves against Bo have set the stage for finishing off that faction. To what end is not yet clear.

The axe fell on former Chongqing Party chief Bo Xilai on Sept. 28, when he was expelled from the Chinese Communist Party (CCP) and brought up on criminal charges.

Whenever a CCP official is put under investigation, Party members usually try to cut ties with him.

Bo cut ties with his former police chief Wang Lijun. Wang was being investigated by Party central and needed Bo’s protection. In a meeting in late January, Wang informed Bo of his wife’s role in the murder of British businessman Neil Heywood, trying to pressure Bo into supporting him.

Bo slapped Wang’s face, removed him as police chief, and planned on murdering him, forcing Wang to flee to the U.S. Consulate in Chengdu.

When Liu Shaoqi (former head of the CCP and heir apparent to Mao) and Deng Xiaoping (former regime leader) were purged during the Great Cultural Revolution, and when Party leader Hu Jintao put former Shanghai Party chief Chen Liangyu under investigation in 2006, both subordinates and superiors cut ties.

For instance, although Chen Liangyu had been a loyal aide to Jiang Zemin, Jiang didn’t try to save Chen.

But until very recently, Jiang’s faction has stubbornly sought to save Bo.

For example, they orchestrated a series of rumors meant to undercut Hu Jintao: Hu Jintao would relinquish the chairmanship of the Central Military Commission; Jiang Zemin had recently surfaced and expected to have a share in power; Jiang’s allies would take a majority of the seats in the Politburo, and so on.

If Hu continues to hold onto power, Bo will not have the chance to reverse his fortunes, and security czar Zhou Yongkang, who has desperately tried to save Bo, will be doomed after the 18th Party Congress, expected to convene on Nov. 7.

Hu retaliated through a CNN interview of former chief executive of Hong Kong Tung Chee-hwa on Sept. 19. Tung said Hu will retain control over the military after stepping down as the Party head.

Hu also attended the handover ceremony of China’s first carrier on Sept. 25 to declare his control over the military. Jiang Zemin was blocked from access to the media and made appearances only on leftist websites.

Hu’s weightiest move: To dispel the rumor that Jiang’s allies would take the majority of the Politburo seats at the 18th Party Congress, Hu announced the trial of Bo Xilai.

In addition to listing a series of allegations against Bo, the regime-mouthpiece Xinhua also mentioned that evidence of his involvement in other crimes was also uncovered during the investigations.

These “other crimes” go to the heart of why Jiang’s faction has been desperately trying to save Bo.

If Zhou Yongkang had cut ties with Bo soon after Bo was ousted, at least Zhou would have been safe temporarily and wouldn’t have had to face off against Hu Jintao, Premier Wen Jiabao, and the next presumptive Party leader, Xi Jinping.

Zhou persisted in trying to save Bo simply because he, Bo, and Jiang had masterminded a coup attempt against Xi. They are all in this together: If any one of them falls, they all fall.

However, Zhou’s vulnerability and guilt go beyond the coup attempt and explain why it was necessary.

The CCP’s persecution of Falun Gong has involved forced, live organ harvesting. At the 21st session of United Nations Human Rights Council, researcher Arne Schwarz said that he estimated that about 65,000 Falun Gong practitioners have been killed for their organs.

Whether this crime can be covered up is critical to whether the CCP will survive or collapse.

If the CCP continues to rule China, Zhou might still be able to enjoy his life after he retires. Otherwise, Zhou will be held accountable for crimes against humanity. The coup attempt was a desperate effort to avoid this fate.

“Other crimes” left the door open for other charges against Bo that could implicate Zhou and other members of Jiang’s faction.

During the abusive “shanggui” interrogation, in order to cut the best possible deal for himself, Bo very likely revealed details about the coup attempt unknown to his wife or Wang Lijun, including Zhou and Jiang’s roles.

Hu Jintao has defeated Jiang’s faction and has hung the charge of “other crimes” over their heads like the sword of Damocles. Now history will test Hu’s mettle.

Has Hu won this battle merely to hand the CCP off to Xi Jinping and enjoy a comfortable retirement? Or will Hu now rise to the moment and give China what it desperately needs?

Will Hu now expose the crimes of Jiang’s faction in the persecution of Falun Gong and turn this power struggle into a liberating battle between good and evil?

Zhang Tianliang is a writer and commentator on contemporary Chinese political and social issues. He contributes to a variety of publications, including the New York-based New Tang Dynasty Television and Voice of America’s Chinese service.

Zhang Tianliang
Follow
Zhang Tianliang (Shujia Gong), Ph.D. former adjunct professor of George Manson University, is dean of the Department of Liberal Arts and Science at the New York Based Feitian Academy of writes on China's history and politics. He contributes to a variety of publications, including the Arts. He is a popular columnist at the Epoch Times and senior commentator at the New York-based New Tang Dynasty Television and a guest commentator at Voice of America’s Chinese service. He is the author of China's Path to Peaceful Transition.