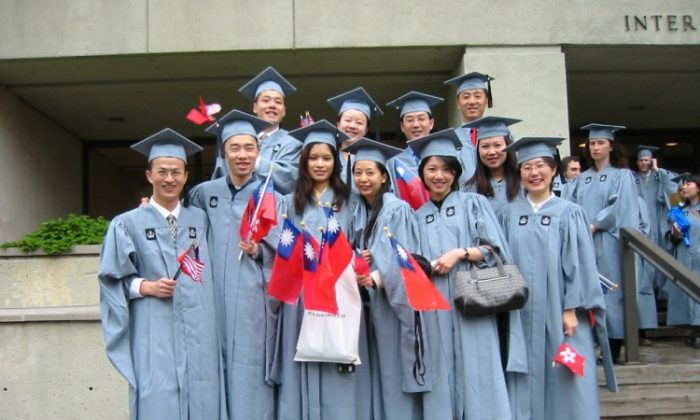 Li Wangzhi appears at the back far right in this group photo taken in 2001. Tang Baiqiao is in the back row, far left. (Courtesy of Tang Baiqiao)
China

It’s known by now that Bo Xilai, the recently ousted Communist Party official, kept a lot of secrets. He is now in the custody of Party officials for “disciplinary violations,” and his second wife, Gu Kailai, is suspected in the sordid murder of British businessman Neil Heywood.

In all the drama, Bo would probably have preferred the story of his eldest son, Li Wangzhi, to have stayed hidden. The tale includes the fact that Li, who was born to Bo’s first wife, is a supporter of democracy in China, and is reportedly under house arrest somewhere in northern China under Bo’s own orders.

Tang Baiqiao, a former student leader of the 1989 Tiananmen movement, attended Columbia University with Li from 2001 to 2003. He recently gave a detailed account to The Epoch Times of his time with Bo Xilai’s eldest son—whose identity Tang only discovered days before Party minders from China, including Bo’s younger sister, paid Li a visit and told him not to associate with Tang any longer.

How does the eldest son of ousted cadre and neo-Maoist hard-liner Bo Xilai become friends with a leader of the Tiananmen student movement and one of the most outspoken critics of the Chinese Communist Party (CCP)?

The Dissident and the Princeling

On the first day of school in September 2001 at Columbia’s School for International and Public Affairs (SIPA), Tang introduced himself to his fellow students as a democracy activist and former Tiananmen leader. He’d spent two years in jail and fled to the United States in 1992.

After the meeting, a younger Chinese man approached Tang and introduced himself as Li Wangzhi. He asked simply: “May I be friends with you?”

Li Wangzhi was born Bo Wangzhi, according to accounts online. He changed his name sometime after Bo left his mother, Li Danyu. Li Danyu was known to complain about Bo to friends in Beijing, calling him a “modern Chen Shimei,” a reference to an ignoble character from the Song Dynasty who abandoned his family after marrying the emperor’s daughter.

Tang described Li in the early 2000s as “young, spirited, and proud.” At that time he did not know Li’s Party pedigree, but was impressed with his deep understanding of China’s political and social system.

“How does this person understand Chinese society so well?” Tang said, reminiscing on his conversations with Li. “His manner, his speech, his understanding of the role of privilege in society. It’s as though he grew up around high-level officials since his youth. He was very smooth,” he said.

Though Tang did not know who Li was, Tang’s reputation preceded him. Li politely declined Tang’s invitation to a Thanksgiving gathering in 2001, instead inviting Tang to his place. “He didn’t want others to know we were friends,” Tang said. Only later did he learn why.

Unlike Bo’s younger son Bo Guagua, whose social exploits have been widely reported, Li kept a studiously low profile. “He was extremely low-key,” Tang said. “No different from a regular exchange student.” He shared an apartment with other students at Columbia; he took the subway because he had no car. One time, he pointed out to Tang which places in Chinatown were cheap to shop at, and every week he would stock up on supplies.

An Idealist and Democracy Supporter

One of their first topics of conversation was the Tiananmen student movement and the massacre. Li said he was only a young teenager at the time so too young to understand when the events took place, but later gained a favorable impression of the Tiananmen participants through contact with faculty at Peking University Law School, where he obtained his first degree. This led him to doubt the official propaganda line.

At Thanksgiving, Li showed Tang his personal Yahoo website that focused on democracy and human rights in China, as Tang recalls. He particularly remembers one essay that Li shared on his Yahoo space, written by Peng Guozheng, a human rights activist who spent over 20 years in jail. The essay won an Epoch Times writing award, Tang recalls.

“Putting this article on his personal website shows that he loathed the Party’s human rights abuses, and wanted democracy in China. That was very risky for someone like him,” Tang said in a long interview over Skype.

Tang finally learned Li’s true identity when they stepped into a crowded elevator together one day. Li left first, and another friend from China asked Tang how it was that he became friends with the son of Bo Xilai. Tang had suspected Li had connections in China, but never imagined he was the son of hard-liner Bo.

But their camaraderie was short lived. A few days after Tang discovered his friend’s identity, Li disappeared. It was just before Christmas in 2001, and Tang was slightly alarmed. He heard later from peers that several Party minders, including Bo Xilai’s sister, had called Li to Boston for several days and given him a talking to. He was ordered to cease his friendship with Tang the “counterrevolutionary,” or he would be in trouble.

After that, when the two passed each other, Li would pretend not to see Tang, or secretly he’d acknowledge his erstwhile friend, but they never spoke.

Continued on the next page: Smooth Admission