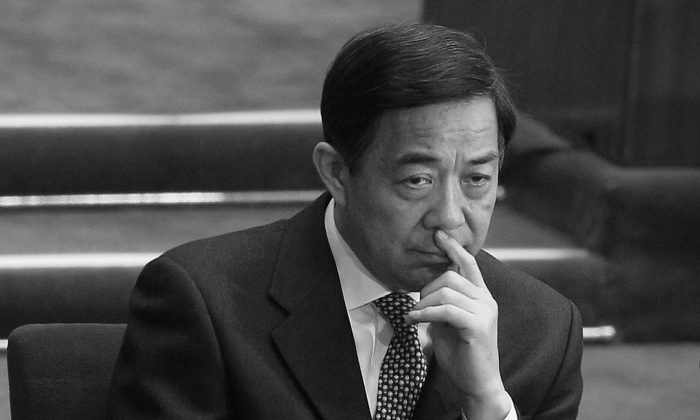 Bo Xilai is seen attending the National People's Congress on March 5, 2012, in Beijing. Shortly after the Congress ended, Bo was stripped of his Party posts. (Feng Li/Getty Images)
China

In bid to save his life, disgraced former Party heavyweight cooperates with investigators
By Guo Hui

Since Chinese Communist Party leader Xi Jinping took power in November 2012, he has cast himself in the role of a tiger hunter, saying that in fighting corruption the Party not only has to go after the “flies,” but also the “tigers.” According to a Hong Kong magazine, Xi is getting the help he needs to put a big tiger in his sights.

The disgraced former politburo member and Chongqing Party head Bo Xilai is actively helping a special task force and developing information that would target a “big tiger,” according to an article by Jiang Weiping in the May edition of New Way Monthly.

Bo Xilai can be assumed to know quite a bit about the misdeeds of former top Party officials. Bo was the close associate of former Party head Jiang Zemin and former domestic security czar Zhou Yongkang. According to sources familiar with the matter, Bo had plotted with Zhou Yongkang and other members of Jiang’s faction to stage a coup after Xi Jinping took power.

According to Jiang Weiping’s report, Bo was initially arrogant and stoic in the face of interrogation; but, as time passed, the fantasies Bo held of a revolt catapulting him to power had crumbled.

Bo’s subordinates had referred to Bo Xilai as “Bo Zedong,” suggesting he was the new Mao Zedong, the founder and charismatic leader who had dominated the Chinese Communist Party for three decades. Bo had expected that the citizens and Party leaders in his old stomping grounds of Dalian in northeastern China’s Liaoning Province and the province-level city of Chongqing in the west would stir up trouble on Bo’s behalf.

Two things changed for Bo, according to Jiang Weiping. First, he saw several ex-mistresses and former subordinates turn over information incriminating him. Second, he saw the peaceful transition of power at the 18th Party Congress in November. At the conclusion of the Congress, Bo’s enemies held the highest positions of power.

After the Congress was over, Jiang Weiping reports Bo Xilai was in tears and ready to make a deal. In return for providing information on his former associates, he is seeking to avoid the death penalty.

Sources close to the special task force and Supreme People’s Procuratorate told Jiang Weiping that Bo Xilai had committed grave crimes and would be lucky to save his life. According to the sources, Bo’s fate depends on whether he can bring down a big Party figure.

According to Jiang Weiping’s report, the long delay in bringing Bo Xilai to trial—as a preparatory move, he was stripped of his Party membership and its immunity from criminal prosecution in early November—is due to the complicated nature of the information Bo is providing. It takes a long time to untangle and verify the facts.

Jiang Weiping’s career has been tied closely to Bo Xilai for over a decade. While Bo was in Liaoning Province, Jiang published an article accusing Bo of corruption, which led to Bo arresting Jiang in 2000 and sending him to prison for seven years. After his release, Jiang emigrated to Canada in 2009, where he has continued writing about his former jailer.