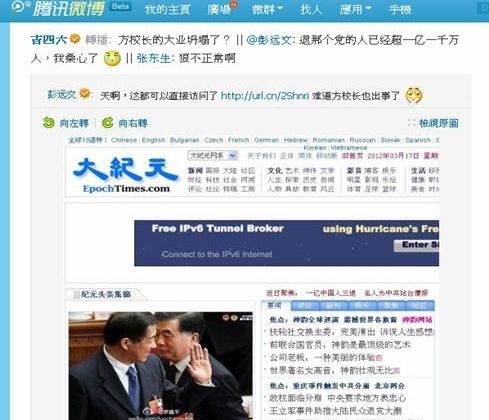 No need to climb over the wall, the Epoch Times can be accessed directly in China. (Screenshot from Tencent Weibo showing what a Chinese netizen saw with his/her browser)
China

Following the dismissal of Bo Xilai as the Party head of the giant central-western city of Chongqing, a clampdown has been taking place in mainland China: some officials are coming under investigation for corruption, Maoist websites are being shut down, and Maoist commentators are getting the sack. At the same time, a surprising opening up has also taken place: The Epoch Times can now be read on the Internet in mainland China.

On March 17, on the third day after Bo’s firing, a netizen on China Tencent Weibo (a popular microblog service) exclaimed: “No need to climb over the wall [break through the Internet censorship], the overseas Epoch Times website can be directly accessed.” After testing, many netizens found it was true.

The Epoch Times Chinese-language website is very popular outside China, garnering over a million hits a day, but inside China it has been heavily targeted for censorship.

A Sichuan Province netizen named Peng Yuanwen exclaimed: “Oh my God! It’s unbelievable to so easily access The Epoch Times directly. I wonder if President Fang has also come across this. There have been over 110 million people to quit that Party.” On its website, The Epoch Times keeps a running tally of how many Chinese people have renounced association with the Chinese Communist Party (CCP) and its affiliated organizations.

The President Fang mentioned by the netizen is Fang Bin-Xing, the president of the Beijing University of Posts and Telecommunications. Because he helped design the Great Firewall of China, he has been seen as an accomplice of the CCP authorities in suppressing freedom of speech and has aroused people’s hostility.

The Great Firewall, also known as the Golden Shield Project, blocks out sensitive websites through the filtration of keywords, including the Dalai Lama, Falun Gong, and the Nine Commentaries, among others.

According to a study done by the Open Net Initiative, a collaborative project of Harvard University, the University of Toronto, and the University of Ottawa, websites that listed the “‘Nine Commentaries,’ a highly critical evaluation of the Chinese Communist Party published by the Epoch Times, were also nearly totally inaccessible.”

Netizen “Green Tea” said, “I just tried and it did work. As soon as I clicked the icon to try to open the website [The Epoch Times website], it worked.” Another netizen named “World Clouds” said on March 18: “The wall-climbing could be done ever since last night.”

A Fujian Province netizen named “A Happy and Rich Life Every Day” commented on the availability of The Epoch Times online, “We have been waiting for 2,000 years! Haha, today’s Chinese people are fortunate! Then again, I still believe that within history there exist self-correction mechanisms! I also have seen a bright future for China.”

Why Zhou Yongkang is Doomed to Follow Bo Xilai

Expect Zhou to be fired from his posts as the struggle inside the CCP continues. Although a member of the Politburo Standing Committee, Zhou is facing trouble and is likely to suffer the same fate as Bo Xilai, columnist Zhang Tianliang argues.