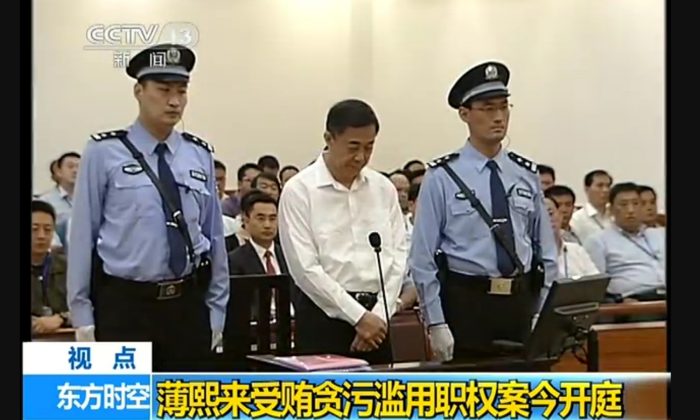 Former Politburo member Bo Xilai stands between two guards at the Jinan Intermediate Court in Shandong Province for the first day of his trial on Aug. 22. Bo gave a combative performance, though the trial elided key details of his activities while in power. (Screenshot/Epoch Times)
China

Bo Xilai, the former Politburo member, struck a surprisingly combative posture when he took the stand in the first day of his trial on Aug. 22, denying and mocking the charges against him and repudiating a confession he had made during disciplinary interrogation.

Most of the authorities’ accusations related to bribes he was said to have accepted from businessmen nearly a decade ago. His more politically sensitive transgressions, whether early or late in his career, are being left out of the proceedings entirely.

Flanked by two guards, Bo was shuffled into the courtroom in the Jinan Intermediate People’s Court in eastern China’s Shandong Province, and allowed to sit down only after the charges were read out. Photos released in the Chinese media show him in black trousers and a white shirt without tie. His shoulders are slumped, and the flashy grin he once wore has been replaced with a tired look of resigned defiance.

Wary that the trial be seen to have at least a modicum of credibility, the Chinese authorities are liveblogging it through the account of the Jinan Intermediate Court on Weibo, China’s version of Twitter. Court transcripts, updates, and photographs appear in JPG files in the posts. Internet censors regularly scrub the comments section for remarks critical of the Party or the court proceedings.

The key charges against Bo on Thursday were that he accepted a 1.11 million yuan (US$181,000) bribe from a man named Tang Xiaolin, the CEO of Dalian International Development Ltd. Co., as well as a 21.79 million yuan bribe from Xu Ming, a billionaire businessman and the head of a conglomerate. Bo Xilai was the mayor of Dalian from 1993 to 1999.

“Let me say a few things simply,” Bo remarked. “The video we just saw of Tang Xiaolin, I truly saw the disgraceful performance of a man who has sold his soul.” Bo said that he had made a confession against his will during a secretive Party interrogation process known as shuanggui, but now “I totally don’t know those things. It’s a blank in my mind.”

He called Xu Ming, who he was once close to, “a thoroughgoing swindler” and “a mad dog, biting everywhere.”

When the confession of Bo’s wife, Gu Kailai, was brought out, meant to show that Gu had removed over $130,000 from the couple’s strongbox, Bo said: “I think Gu Kailai’s testimony is extremely comical, utterly ridiculous.” He added: “Let me give an example…” before proceeding to discuss details from the period and why he thought the charges were not credible. Gu, he said, is a “culturally refined person and a modern intellectual woman.” They hardly had occasion to talk about money, he claimed.

There are no independent observers of the trial. The dozens of journalists that traveled from around China to report on it were shepherded into a building across the street, where they are simply watching the Jinan Court’s Weibo updates. “I have nothing to say,” the account for Lanjing Financial, a news website, posted. “Everyone here is just refreshing Weibo. We came here from far, far away, just for this~~” The account added a series of emoticons meant to express exasperation.

The trial of Bo Xilai, and the lead up to it since last year, is one of the most politically significant events in China in the last decade. Bo was a member of the Chinese Communist Party’s Politburo, from which the Standing Committee—the group of seven men that rule China—is drawn.

From his southwestern stronghold of Chongqing, Bo was attempting to make a bid for the next level of political power by mobilizing Maoist-style singing events, and using the full power of the security apparatus to punish “gangsters”—among whom critics said were his opponents and legitimate businessmen—while stripping their assets.

He is also said to have plotted a coup, along with top security official Zhou Yongkang, to seize power before now-Party leader Xi Jinping could establish himself. Xi took the helm of the Party in November last year.

In former official positions in Liaoning Province in the late 1990s and early 2000s, Bo Xilai oversaw the expansion of prison camps used to persecute practitioners of Falun Gong. Liaoning was also a key region in which the organ harvesting of Falun Gong detainees is believed to have taken place, while the province was under Bo’s watch.

Bo’s former right-hand-man, Wang Lijun, is on record boasting of performing “thousands” of “on site” transplantations from his research clinic attached to the Jinzhou Public Security Bureau. A falling out between Wang and Bo led to the crisis in early 2012 that engulfed Bo’s career and resulted in this trial.

There is some divergence of opinion among commentators on whether Bo’s performance on Thursday was all part of the plan, or whether he was truly defying authorities.

Zhejiang Province rights activist Chen Shuqing said in a telephone interview with Epoch Times: “Bo Xilai’s trial is like a play, following a planned rehearsal. The so called ‘live broadcast’ is not really live. It’s published on Weibo. In this way, if there’s anything out of the plan, such as Wang Lijun’s case, the persecution of Falun Gong in Dalian, and the attempted coup against Xi Jinping, they can choose not to broadcast it.”

Reuters quoted Zhang Sizhi, who defended Madame Mao during the trial against the Gang of Four in 1980. “He knows exactly what to say and what not to say,” Zhang said. “It seems some sort of understanding was reached ahead of time.”

Shi Cangshan, an independent commentator on Party affairs based in Washington, said in an interview with NTD television that Bo’s performance on Thursday “sent a very clear signal: Bo Xilai is going to fight to the death with Party Central.” He suggested that the authorities may decide to “turn up the heat” if Bo continues.

If Bo Xilai is veering off script by resisting the charges being put forward by the Party, he is still participating in the same play. “Even though Bo rejects the accusations against him, he is still playing ball in what is, in essence, a scripted piece of political theatre,” wrote Nicholas Bequelin, a researcher with Human Rights Watch, on Twitter.

The trial ended at around 6 p.m. and will continue on Aug. 23 at 8:30 am, according to Jinan Court’s official Weibo.

The Hong Kong newspaper Wenweipo, which is friendly to Beijing, ran some speculation about how Bo might be punished.  “Information leaked from Beijing says that Bo will be charged 15 to 20 years,” the paper said. “Other people say it could be 13 years. But our sources say it’s more likely to be 16 years.”