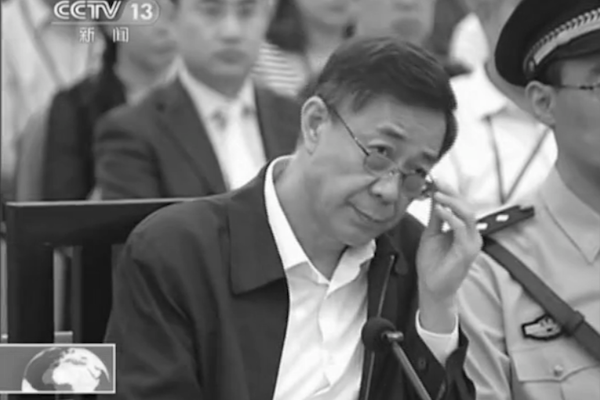 This screen grab from CCTV shows disgraced former Politburo member Bo Xilai on trial in the Jinan Intermediate Court in Shandong Province on Aug. 25. Bo continued to defend himself against almost all charges, although remarks regarding his role in attempting to cover up his wife's role in the murder of Neil Heywood may have shown some remorse. (Epoch Times)
China

The stage-managed trial of former Chinese politburo member Bo Xilai went into its third and fourth days over the weekend, with more anecdotes of high-level corruption, and Bo’s former deputy, Wang Lijun, being trotted out by prosecutors. A note of contrition, previously absent, could be sensed in some of Bo’s remarks, though he remained defiant and dismissive of the claims made against him.

The Saturday trial on Aug. 24, which lasted a full day, brought forth accusations that Bo had embezzled public monies to the tune of 5 million yuan ($816,860). Prosecutors played a video of Bo’s estranged wife, Gu Kailai (herself now in prison for murdering British businessman Neil Heywood) saying that Bo gave permission for a housing official to deposit into Gu Kailai’s bank account that amount siphoned off a public works project.

“The testimony of the witness actually contradicts itself,” Bo remarked in his defense. “The testimony he gave and the objective facts differ so much, and also what he’s saying doesn’t conform to common sense.”

Bo said that Gu had plenty of money to support herself and their son, Bo Guagua. The couple had by that stage separated after he cheated on her. Bo said that her testimony was also self-contradictory, and that, “vulnerable” in the hands of aggressive interrogators, she was lying in order to get a lighter sentence.

The afternoon of the trial on Aug. 24 centered on the allegation that Bo Xilai had abused power as the Party Secretary of Chongqing, a large city in southwestern China. The chief contention here was that he had attempted to intervene in the Heywood murder case.

Bo said that he indeed “made mistakes, and impacted the reputation of of the Party and the country.” On several occasions he said he was “ashamed” because of that. “At the key moment I did not handle this matter calmly, and made a great error of judgement,” he said. He reported being angry that Gu Kailai, a “feeble woman,” was accused of killing someone.

After Wang Lijun raised with Bo the investigation of Gu Kailai’s murder, Bo struck him—whether with an open or closed fist was a matter of some dispute at the trial—precipitating his escape to the American consulate in Chengdu that blew the story into the open. Bo said he couldn’t be held responsible for that.

Wang Lijun then appeared, possibly in a wheelchair, according to information later posted online, and said that he was “not only a witness, but also a victim.”

Information about the trial is only available through state-run media outlets, whose coverage serves the propaganda directives of the Chinese regime, and the microblog feed set up by the Jinan Intermediate People’s Court, where the trial is being held. No video or audio record of Bo Xilai is ever released. He speaks only through transcripts, posted as image files—and reportedly sanitized of inconvenient references—on the court’s microblog.

The trial on Aug. 25, a Sunday, lasted only for the morning session. Bo maintained that Wang Lijun was lying throughout his testimony, and that Bo had never learnt boxing and couldn’t strike very hard anyway.

“Overall, the personal quality of this man is extremely vile. Firstly, he lied in open court; secondly, he mixed up the facts. Having this person as a chief witness makes the legal system lose credibility.”

The judge then reprimanded him. “The court reminds the defendant that the decision to notify Wang Lijun to attend court and bear witness was made jointly by the prosecutorial organs and the defendant.”

“Thank you,” was all Bo Xilai said in response.