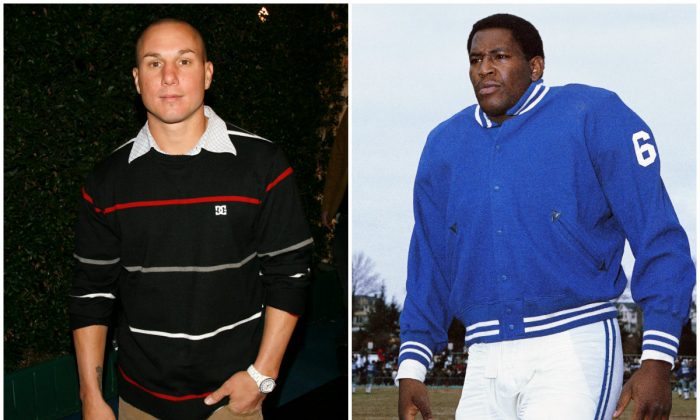 Mirra is the first action sports athlete to be diagnosed with CTE, according to ESPN Magazine.

He was the first rider to land a double backflip and to win three gold medals at a single X Games.

His brain was donated to CTE research at the University of Toronto by his wife Lauren Mirra.

Dr. Lili-Naz Hazrati, the neuropathologist who studied Mirra’s case, said his brain was indistinguishable from those of former football and hockey players with CTE.

“I couldn’t tell the difference,” she told ESPN.

The BMX legend suffered a fractured skull after getting hit by car when he was 19. Mirra suffered countless concussions during his BMX career, and also did some boxing.

“It’s assumed it is related to multiple concussions that happened years before,” Hazrati said.

Mirra’s wife received her husband’s CTE diagnosis in March, and shared difficult and emotional moments in the last months of the athlete’s life.

“I remember seeing him sitting on our bed one day, in the last month of his life. I had just gotten out of the shower and saw him hunched over with the blankest lost look. I sat down next to him and held his hand. I said, ‘What is wrong? Are you OK?’ And he just shrugged his shoulders,” recalled Mirra of one of the incidents.

“He couldn’t even speak. He didn’t know. He couldn’t put it into words. He was lost. He was helpless. It was completely different from who he was,” she said.

Smith, a two-time Pro Bowl defensive end, College Football Hall of Famer, was also an actor known for his role in the “Police Academy” movies. He played for three teams during his NFL career, the Baltimore Colts, Oakland Raiders, and the Houston Oilers.

Smith died in 2011 at the age of 66 from an acute drug intoxication and other conditions. He is the 90th former NFL player diagnosed with CTE since 2008.

Researchers say he had stage 3 CTE out of a 4 stage severity, with 4 being the highest and commonly linked with dementia.

Before the athlete died he had developed significant cognitive decline, including memory impairment and poor judgment, said the foundation.

Smith also had trouble with daily tasks like paying bills, shopping, or traveling.

Bubba Smith played at @MSU_Football before being selected as the #1 overall pick in the 1967 #NFL draft. #CTE pic.twitter.com/S37dO0wOWS

“CTE is an important discussion within the context of the NFL draft and rookie minicamps,” said Chris Nowinski from the Concussion Legacy Foundation.

“Despite its perception as an NFL problem, our team has also identified 45 cases of CTE in former college players. While we discuss and celebrate the future of former college players preparing for their first year in the NFL, we need to also discuss that CTE may be part of that future. It is time for entire football community to rally behind the research aimed at accelerating a cure for CTE,” he continued.

Smith’s CTE diagnosis was released by his estate representative, Elias Goldstein, in an effort to raise awareness about the disease.

“This is the beginning of bringing awareness,” said the BMX legend’s wife.

“It would be amazing if this is something we can detect in life one day. If we can detect it, prevent it, stop it, let’s do all of the above,” she added.