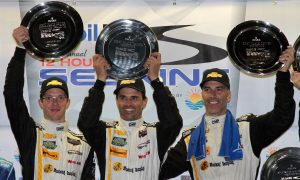 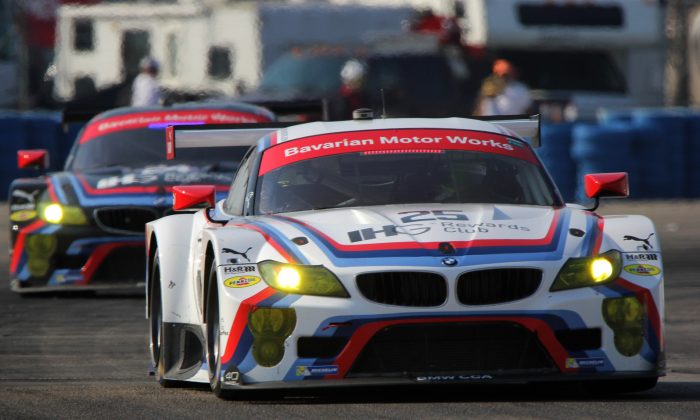 Auberlen put the #25 Rahal-Letterman-Lannigan-BMW Z4 GTE on the pole for the Tudor Long Beach Sports Car Challenge with three laps faster than the old track record of 1:17.939.

The Redondo Beach native lapped the tight and tricky 2-mile, 11-turn Long Beach street circuit—a track where the slightest error introduces the driver to concrete K-rails—in 1:17.268 at 91.691 mph, more than half a second quicker than the previous mark.

Auberlen was ecstatic to take pole in front of his home crowd, particularly since he got beaten for pole at Long Beach at the last moment in 2014.

“Winning this race—this is my home race. I live in Redondo Beach, California, just down the street from here. I’m a Southern California native just like all these awesome people that are around here, so I feel their energy.

“This track is my home track. Of all the races we go to, Daytona, Sebring, Le Mans, this is the crown jewel for me. I don’t want to win any race more than this one,” Auberlen explained to IMSA radio’s Jeremy Shaw..

“We came out of Sebring. I’m 46 years old. The guys that are on my team are fastest in the world and they’re just out of diapers, right? So, I’m the older guy; I set a new lap record at Sebring, I’m on the pole here—the old guy still has some speed left. And half a second quicker around Long Beach—that’s a lot.

“BMW, in the off-season, we all worked very hard. The series gave us a little speed in a straight line which never hurts. We worked on the aerodynamics, the Rahal guys never ever quit. When Sebring was over they started redoing stuff on the car before we came here. They never stop and when you put the Michelin tires, BMW, Rahall, and these guys here together it’s lethal.

“Phase One complete—now it’s time to win this thing. Tomorrow five o’clock we need to put this car on the top step of the podium.”

John Edwards was slightly less enthusiastic, understandably, but still glad for his team.

“It’s a great day for BMW. For a driver on a personal level you never want to get beat by your team mate but if you are going to do it, you might as well be sharing the front row,” he told IMSA radio.

“Tomorrow’s going to be interesting. We’ve got a good fight between the two cars and hopefully we can finish the same way—at least for the brand—as we started. We’ll be pushing in the beginning to get by Bill, for sure.”

The story of the session belonged to Gaincarlo Fisichella. The Risi Ferrari driver lost control of his car after the checkered flag waved for the final practice session, banging up the left front and entire rear end of his #62 Ferrari 458 only ten minutes before qualifying started.

The Risi team worked at warp speed to cobble together a working car for qualifying; Fisichella missed more than half the session, but he came out on fire, determined to pay back his crew for its efforts.

Fisichella qualified third; where might he have ended up had his car not been damaged?

“It’s a good recovery and considering what happened 10 minutes before the start of the sessions, it’s a great lap. The car was not perfect. Unfortunately there was some problem with the toe and even with the bodywork, but, ‘Thanks!’ to the guys; they did a fantastic job, brilliant job,” Fisichella told IMSA radio.

“It looks promising for tomorrow. Obviously BMW are very quick but I think we can fight them for the podium.

“We need to be away from the wall [chuckling quietly] and do a clean race it’s a difficult circuit for overtaking but I think if we do a good pit stop and a good strategy, we can fight for the podium.”

The Tudor United SportsCar Championship Tequila Patron Sports Car Showcase at Long Beach will be streamed live on IMSA.com on Saturday, April 18 starting at 7:05 p.m. ET and will be broadcast Sunday, April 19 on Fox Sports 1 at 4 p.m. ET. Timing and scoring is also at IMSA.com.