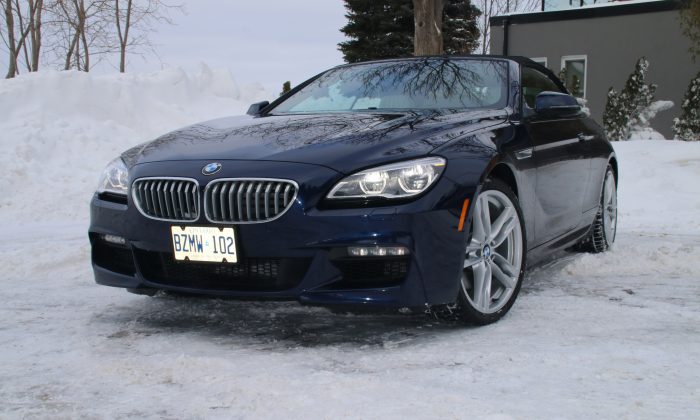 A convertible that performs (well) in winter weather?
By David Taylor

When I had the opportunity to take the 2017 BMW 650i xDrive Cabriolet for a week-long test up in my neck of the woods, Central Ontario, we still had loads of snow and ice on the roadways and ambient temperatures were not exactly conducive for drop-top driving.

I must also admit that I was a little leery about taking this blue behemoth on local roads and highways until my walk around the car at BMW HQ in Richmond Hill showed me that the vehicle was clad with quality winter rubber. Regardless, the thought of a twin-turbocharged V8 powered and engineered to the nth degree machine during a week when temperatures would never scale above 0 degrees Celsius made me a little anxious.

As soon as I positioned myself behind the wheel and adjusted everything—seat, mirrors, steering wheel, and pushed the button to engage the 4.4 L engine, any doubts quickly vanished. Aggressively thrusting out 445 horsepower and 480 lb.-ft. of torque (marvelous German engineering), this car helps to almost innocently establish itself in the pantheons of unexpected performance machines—that come equipped with luxury, opulence, and some glorious technology that warrant the $120K plus price tag. The TwinPower 4.4 L V8 wakes up with a growl and keeps an initial fast idle then quickly lowers its aggressive tone until the resonating exhaust, sounding like an automotive-inspired James Earl Jones, drops into its natural rhythm and cadence.

To be 100 percent clear, as with other BMW models, the “50i” designation has absolutely nothing to do with a 5.0 L engine. In fact, all 650i models surge forward when the throttle is engaged, powered by BMW’s seemingly fire-breathing, barely-tamed yet highly-tuned 4.4 L twin-turbocharged V8 with an all-aluminum block and direct injection.

Experience the Merits and Bragging Rights of German Engineering

Initially driven sedately to better understand the car and its not-so-subtle nuances of power and general performance, everything about it felt familiar and safe. The eight-speed automatic gearbox is almost self-effacing, practically unobtrusive and never seems to be hunting for the right gear at the wrong moment. BMW’s infamous “gear” shifter is also present. The 650i Cabriolet comes standard with BMW’s xDrive all-wheel traction, and even with wintry road surfaces, somehow I never managed to inadvertently provoke the vehicle’s traction control—such is the degree of design and engineering built into this driving machine.

As with the majority of BMWs in their extensive product lineup, the 650i has various driver-selected methodologies, dependent upon individual mode, weather and sensibility. For “normal” day-to-day driving, this BMW acquitted itself best in Comfort mode—safe, yes, but the dynamic feel of the vehicle as it adhered to all road surfaces was obvious. Other modes include Comfort+ (if you wish to feel as if you are driving a 70’s-style Lincoln Continental with a hood the length of a football field as it almost bounces along in extreme slow motion.) Sport mode firms everything up and sends the tachometer into fits and starts. Best leave Sport + for controlled track days: the shocks become practically non-existent and all driver aids go into hiding. But the sound of the tuned exhaust? Good and visceral enough to make this driver grin like a fool once engaged!

The Interior Matches the Promise of the Exterior

The interior of this vehicle does not let down the owner. The overall ergonomics are also worth mentioning. With clear and intuitive buttons for HVAC and basic audio controls, such as source or AM/FM or satellite pre-sets. Further, audio on/off and volume is accessed through a well-located rotary control—something that a certain Asian manufacturer continues to inexplicably avoid. The seats are more than worthy with multiple power adjustments for height, thigh support (as noted before, my wife is a huge fan of this feature in automobiles) lumbar—everything. I challenge you to be disappointed in your choice of seating position! The seats also offer mechanical ventilation through their perforated leather, will perform a massage on your derrière at the touch of a button, and are, of course heated, for Canadian winters. Accessing the two rear seats is done by powering the front seats forward on their tracks. While technically a four-seater, the back seat is likely better suited for children or smaller adults practiced in the ancient art of human origami. The 650i’s very wide doors do help with passenger entrance and exit, but please note—practice is required.

BMW claims 4.6 seconds for 0-100 in the 650i, which for a relatively heavy vehicle is respectable. Even the added weight of the convertible cloth top doesn’t affect overall performance too much, as the power delivery is very smooth and quiet.

Pricing for the 650i xDrive starts at $111,500, which is an $11,000 premium over the base coupé. This test vehicle was the M-Sport Edition, which, for an additional $8,400, adds a laundry list of options, including the M-Sport aerodynamics and styling, inside and out, ventilated seats, soft-close doors, ceramic interior controls, wireless charging, a premium Harman-Kardon sound system, premium seats, full driver assistance group, and Nappa extended leather. Then add on the individual paint (in this instance, Tanzanite Blue) and the full Merino leather ($5,900), and you’re at the sticker price of our tester, which was $126,800—before BMWs delivery charge and all taxes.

Sticker shock notwithstanding, this vehicle provided some of the most fun we had in a car all winter (except for a Ford F-150 Raptor event in Mécaglisse in Quebec) and made us state out loud that driving this vehicle again, when weather and roads were unencumbered with freezing temperatures and sheets of ice, would absolutely be in order!