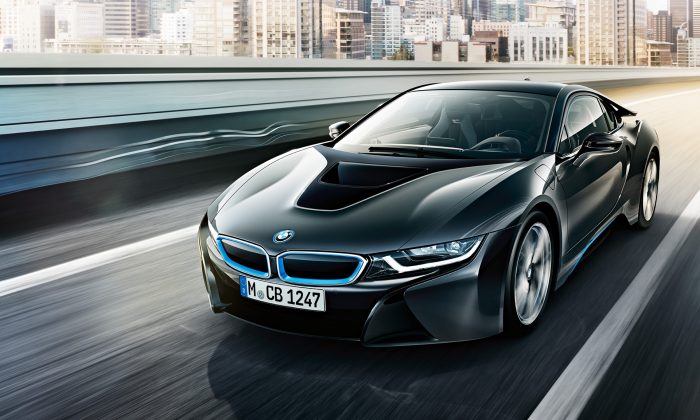 BMW i8 (Courtesy of BMW)
Autos

BMW i8: What Lies Beneath

The BMW i8 concept was first introduced back in 2009 at the International Motor Show Germany. It has been turning heads ever since. Curious onlookers and automotive enthusiasts alike have clamored to catch a glimpse of the hybrid supercar. Production models finally started rolling off the line last year, with much aplomb.

To borrow an old slogan, this is not your grandfather’s hybrid.

Beginning with its supercar styling, the i8 is an attention grabber, to say the least. Built with carbon-fiber body parts, the design evokes a sense of speed and power. Carbon, which is as strong as steel, but 50 percent lighter, offers a strong, but light-weight material to maximize fuel efficiency. The i8’s shark-nose grill and low-slung stance suggest there is a V12 engine lurking beneath the hood.

However, what lies beneath might actually be better than your standard old gas-guzzling V12. Instead, a fuel-sipping, dual powertrain powers the i8 and delivers exactly what you need, when you need it. In fact, the i8’s hybrid may just be perfect for Houston.

This is not your grandfather’s hybrid.

When you’re sitting in traffic, say somewhere along Highway 45, you can easily keep the car in EV mode. Under this setting, the i8 operates fully on electric power, tugging along at speeds up to 75 mph and yielding 129 hp. It’s deceptively quiet, making a typical Houston commute a peaceful experience. You’re certainly not going to win any races in EV mode, but it does prove to be exceptional in heavy traffic.

On the weekends, head on outside the city and into the hill country to open up the i8’s supercar personality. Switch from EV mode to Sport mode and watch this car come to life with 357 hp. Even the gauges change color from blue to red, indicating that you’re about to have a completely different experience. The 1.5 L 3-cylinder aided by a 131 hp electric motor kicks on, yielding power that is nothing short of magic. Like all true hybrids, in this setting, it recharges itself. However, feel free to plug it in at night, back home in the garage.

Back to its magical performance dynamics, prepare to hit 60 mph in about 4.6 seconds. Make that 3.6 if you can handle a launch-control start. Steering is laser-like, even beyond what you’re accustomed to from a BMW. The engine, two motors, and two transmissions work together seamlessly, without any kind of lag or indication that this is a hybrid vehicle.

When operating in Sport mode, fuel economy hovers just under 30 mpg. Balance that out with EV mode, which doesn’t even require fuel at all, and you’ve got yourself plenty to brag about.

With a price tag that starts near $140,000, the BMW i8 offers an incredible blend of performance, technology, fuel economy, and style. Its dual personality is perfect for the Houston commuter who wants something more out of their daily commute.