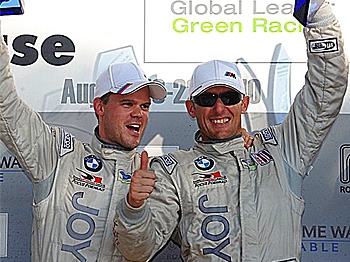 “This was a great win,” Dirk Mueller told SPEED-TV. “This is what we needed and we got great points today, too.”

“It was a great car today. I went out there ready to win this race. After the start I went to the front.

“I told these boys I was going to do it for them I was going to hand off to Dirk—I told him right before the race, ‘I am going to get this thing in front, and all you have to do is keep it out there, alright?’ And that’s what we did.”

Hand took the lead briefly between yellow flags—the latter of which was for the other BMW.

22 minutes into the race, Bill Auberlen in the #92 BMW touched Scott Tucker’s #55 LMPC Oreca, cut Tucker’s tire. Tucker slowed and Auberlen rammed him, sending both cars into the right-hand wall and out of the race.

Bill Auberlen and co-driver Tom Milner had been ahead of their sister car’s drivers in GT points, but that lead disappeared as the BMW went to the garages.

Olivier Beratta’s #4 Corvette resumed the lead in the pits under caution, staying out while Jonny O’Connell brought the #3 in, complaining of no grip. The #3 Vette dropped back while Jaime Melo in the #62 Risi Ferrari passed Beretta for the class lead.

Hand moved into second on lap 25 when Beretta pitted, then pitted himself when the Rocketsports Jaguar expired on track, bringing out another yellow. Hand came in and handed off to Dirk Mueller, Melo swapped seats with Gianni Bruni, and Johannes van Overbeek assumed the lead in the #01 Extreme Speed Ferrari, followed by the Falken and Flying Lizard Porsches of Wolf Henzler and Patrick Long.

Patrick Long passed Henzler on the next lap, and inherited the lead when Overbeek pitted under yellow the lap after. When the green flag waved on lap 43, Dirk Mueller got his BMW ahead of Long’s Porsche and into the lead.

With less than an hour to go the entire GT field was charging; ten GTs were within thirty seconds of the leader, and 3.5 seconds covered the top four.

Mueller led Patrick Long’s Porsche, Gianni Bruni’s Ferrari, and Jan Magnusson’s Corvette, but any of these cars seemed quick enough to win. Meanwhile, Oliver Gavin in the #4 Corvette moved from 8th to 5th in class, reeling in the leaders.

On lap 54, with 28 minutes left in the race. 2.8 seconds covered the top five GT contenders, with Guy Cosmo’s Ferrari only six seconds behind that bunch.

On the next lap, Gaving passed his teammate Magnusson, the lap after that, both Vettes passed Gianmaria Bruni to sit third and fourth.

Coming into the final minutes, Mueller, Long and Gavin started to gap the rest of the GTs, fighting their own separate battle for the class win. But neither the Porsche nor the Corvette could equal the speed of the BMW, and Dirk Mueller was pulling away as he crossed the finish line and took the checkered flag foer his team’s first class win of the season.

Rahal Letterman BMW’s first win of the season, coupled with its string of strong finishes, gives it a six-point lead over the Flying Lizard Porsche, which leads the Risi Ferrari by eight points.

If the Lizards can pull off a win at Mosport, and BMW finishes third, the two would be almost tied. If BMW does better and Porsche worse … Risi needs a win at Mosport to even be close heading into the final round.

The GT class is still up for grabs—any of the top three could win it all.

Green Earth Team Gunnar got its third LMPC win of the season, closing within four points of class-leading Level 5. Gunnar Jeannette and Elton Julian brought their #99 Oreca FLM09 home a comfortable 22 seconds ahead of Luis Diaz in the PR1/Mathieson car, which had Scott Tucker’s #95 Level 54 machine right on its wing.

Tucker had a disastrous weekend. First, the team blew three engines—engines designed to last the entire season. Then, early in the race Bill Auberlen assisted the #55 Level 5 car into the wall. Tucker’s third-place finish in the #95 car kept him in the point lead, but just barely.

Elton Julian told SPEED-TV, “This goes to the team and the strategy. It was really a team effort.”

Gunnar Jeannette agreed: “Mark Schomann, our engineer called it absolutely perfect, and everybody on the team did a fantastic job. Our car wasn’t the quickest this weekend—the PR1guys definitely had us on speed—but Elton did a great job—we kept pushing.”

If Level 5 can figure out their engine problems by Mosport, they could go to the season finale at Road Atlanta with a small cushion. If not, they could head to Petit Le Mans trailing in points. Too close to call.

Jeroen Bleekemolen and Tim Pappas continued their winning ways in GTC, leading the rest of the class by a lap when the checkered flag fell.

There was plenty of dicing earlier in the race, with Romeo Kapudija and Bill Sweedler in the #23 Alex Job Porsche, Bret Curtiss in the #22 GMG car, Luke Hines in the #48 ORBIT car, and Shane Lewis and Vic Rice in the #88 Velox car taking turns in the lead.

Ultimately, spins, collisions, and penalties for pit-lane speeding slowed the competition, while Pappas and Bleekemolen avoided accident and error to cruise to victory.

“I came out in 2nd position and I got to regain the lead,” Jeroen Bleekemolen told SPEED-TV. “The next stop I came out in 4th and had to fight back to get the lead.

“I had Andy Lally behind me who was really pushing to take his lap back, so I fought to keep him behind me. I still had lots of overtaking today.“For me, this is the best track in North America.”

Black Swan Racing has won four of its six races in 2010, and leads tits class despite having missed Sebring. Alex Job Racing, even with 30 points from winning Sebring, trails by four points; they have not managed a win since Long Beach.

The American Le Mans Series heads north for its next race, the Grand Prix of Mosport on August 29, 2010, at Mosport International Raceway just north of Toronto, Ontario, Canada.

Tickets are available through the Mosport Raceway ticket Web page.

The race begins at 3:05 p.m. EDT. Television coverage begins at 4 p.m. on SPEED-TV in the United States.