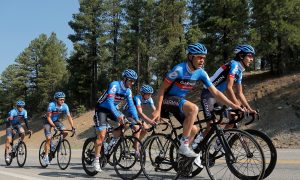 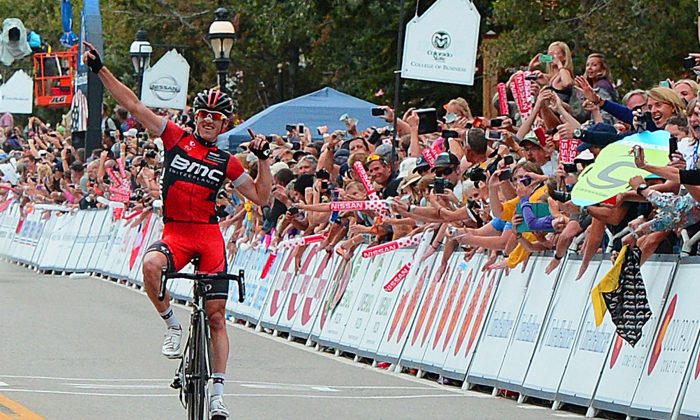 Mathias Frank sits up to celebrate, losing the few seconds which might have won him the race leader’s yellow jersey as well as the stage. (Garrett W. Ellwood/Getty Images)
Cycling

It was not the big, high-altitude climbs which decided Stage Two of the USA Pro Challenge, but the last little Cat Three hill.

Not that any Cat Three climb is “little” at the Colorado heights where the Pro Cycling Challenge tales place, but after cresting Independence Pass at 12,000 feet and Hoosier pass at 11,500, the climb up Boreas Pass seemed minor. It proved to be decisive.

It was on the Cat Two Hoosier Pass, 26 km from the finish line, that Garmin Sharp’s 21-year-old star Lachlan Morton launched his attack, looking to repeat his solo win in Stage Three of the Tour of Utah two weeks before.

Morton wasn’t to have his way on this day. BMC’s Mathias Frank and Bontrager’s Lawson Craddock caught the young Garmin rider on the descent. This trio cooperated all the way until they reached the final climb, six K from the finish.

Though short, the climb was steep, up to fifteen percent—a good place for a selection. Again, Morton attacked; Frank was able to stay with him, while Craddock dropped back. Frank then counterattacked, and opened a slight gap on his young pursuer.

Lachlan Morton was tied with race leader Peter Sagan on time; Mathias Frank was only five seconds back. It seemed one of the pair would win both the stage and the yellow jersey. Then over the top of the hill appeared Peter Sagan, determined to keep yellow and keep adding to his list of amazing victories.

Frank pushed on, though exhausted by his effort on the climb—the altitude had broken many good riders in Stage One, and Frank felt the effects. The 25-year-old German held on to win the stage by three seconds over Morton; if he hadn’t sat up to celebrate as he crossed the line, he might have won the jersey as well.

Morton had to be satisfied with second—and the race lead; and the Best Young Rider’s jersey on top of that. Sagan finished 14 seconds behind—another strong showing from the 23-year-old Slovakian powerhouse. These three riders are going to be gracing podiums for many years to come.

“It was a really tough stage, especially at this altitude it’s so hard,” Franck told NBS-SN after the race.
“This was a relaly active race from the beginning. We had Michael Schär in the first move, so it was really good for us. They brought that back like half-race and from then on it was just one attack following another one—it was just full gas. We were really active; we were in all these moves.

“I had good legs—I was surprised. Yesterday I had a hard day breathing up here, and today it was okay. I still had something left in my legs at the finish and it was good.”

Frank claimed not to be bothered that he missed the yellow jersey by such a small margin.

“I was thinking about the stage win first. I knew I f I could hold them off I had a good chance also to take the jersey, but for me the stage win was the most important thing, and that’s what I got, so I’m really happy.”

Stage Three, 171 km from Breckenridge to Steamboat Springs, heads downhill for the first half (except for a quick Cat Three climb in the first ten K,) then climbs for 45 km to the Cat Two Rabbit Ears Pass at 9400 feet. From the the route drops steeply into Steamboat Springs, where it might well finish in another sprint victory for Peter Sagan.