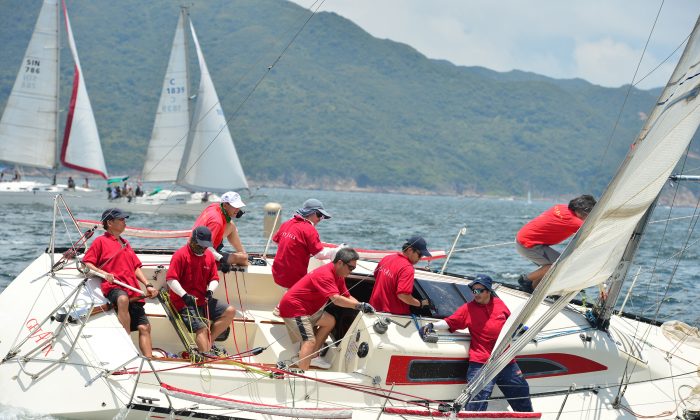 Blustery Conditions and the Occasional Downpour for Typhoon Races

HONG KONG—Day-2 of the Hebe Haven Yacht Club Quest Yachting Typhoon Series 2015 took place on June 21 with two geometric course races (Races-2 and -3) inside Port Shelter. The weather changed dramatically from the scorching sunshine at the Dragon Boat Championships the day before to a mixture of short heavy downpours intermingled with sunny periods. The frequency of storms increasing as the afternoon progressed. The wind was blowing from the east and varying from 10 to 15 knots. As with Day-1, 52 boats turned out but the mix of boats changed a little.

According to David Robinson of Fragrant Harbour, yachting magazine, that has been a sponsor of the Typhoon Series for about 20 years, the original idea of the Typhoon Series with races taking place at fortnightly intervals and allowing 2-discards over the nine races was to cater for the varying work rosters of Hong Kong pilots and other flight crew. This still seems to be the case as crew make up and competitors often change from race to race.

All boats covered a windward/leeward courses but IRC-A and HKPN-A boats travelled to a further windward mark. The four starts per race released IRC-A and –B; IRC-C J80’s and Sportsboats; HKPN-A and HKPN-B Division respectively. The conditions were not easy, with variability of the wind and at times driving rain coupled with high powered speedboats, speeding through the race area creating huge wakes. Footloose was seen in considerable difficulty as she was approaching the finish of Race-1 after a large powerboat swept through.

Round the world sailors, parents of Hong Kong and Swedish yachtsman, Peter Backe, currently in Hong Kong were celebrity spectators of the day’s event watching from their sloop Liv.

IRC
“Freefire” joined the IRC-A fleet for Race Day-2 of the series taking line honours in the first race but dropped way down the order to 7th place in Race-3. In the first race, “Zannekin” took 1st place on corrected time, “Straight Up” was 2nd, “Signal 8” finished 3rd and “Freefire” was 4th. In the second race, Race-3 of the series, “Zannekin” took line honours but was placed 3rd on corrected time behind “Straight Up” and “PDSTIFX”. At this early stage in the series “Zannekin” is leading on 6 points “Straight Up” is lying second on 8-points and “Stella” is lying third on 10-points.

In IRC-B Division, “Lighthorse” took line honours in both races but “Sea Wolf” moved into 1st place on corrected time. “Mojito” and the rest of the fleet finished in the same positions in each of the two races. “Mojito” (3rd), “Stella” (4th), “Blackjack” (5th), “Outrageous” (6th) and “Avant Garde” (7th). “Lighthorse” is heading the series on 5-ponts, followed by “Mojito” and “Stella”, both of whom are on 10-ponts.

In IRC-C, “Dexter II” took line honours and 1st place on corrected time in both races. “Gambit” picked up the silver prize in Race-2 followed by “Gearbox”, “Moll” and “Ding Dong”. In Race-3 “Geabox” came 2nd, “Gambit” 3rd, “Goddess” 4th and “Ding Dong” was 5th. “Dexter II” currently has a perfect record with 3-wins in the series. “Gearbox” is lying second on 7-points,

HKPN
“Scintilla” came to the fore winning both races on Day-2 on corrected time in the HKPN-A Division. In Race-2 “Getafix” came second and “Kiasu” was 3rd, while in Race-3, “No One Else” came 2nd and double line honours winner “Kiasu” came 3 rd. “Kiasu” and Scintilla are both on 8-points after 3-races with “No One Else” lying 3rd on 11-points.

In HKPN-B Division, “Windseeker” headed the 11-boat fleet to take line honours in Race-2 and collected 1st prize on corrected time in both races. “Eclipse” had a good day with line honours in Race-3 and two 2nd place finishes. “Yilong” took 3rd place in each of the two races. “Pepper & Salt”, Race-1 winner on June 7 came 4th in Race-2 but did not finish Race-3. Other stalwarts of this division “Gecko”, “White Dragon”, “Scrumpy” and “Sleepy Piggy” had middle of the order and lower order finishes but produce added colour to the event.

Sportsboats
“Merlin” took 1st place in both races in the Sportsboat Division (just 3-boats) giving Steve Bourne 3-wins in the series so far. “Sidewinder” was 2nd in Race-2 but switched places with “Black Magic” to take 3rd place in Race-3. In the series,

Next Races
This coming weekend on Saturday June 27 will be race day-2 of the 2015 UK Sailmaker Summer Saturday Series. The next race-day for the Quest Yachting Typhoon Series is an islands race on Sunday July 5.