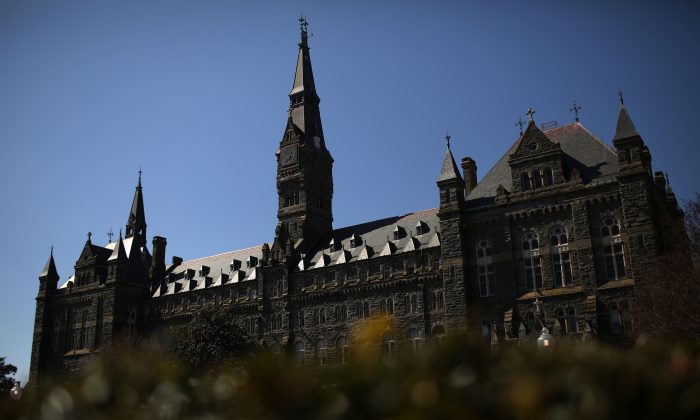 The campus of Georgetown University is shown in Wash., DC., on March 12, 2019. (Win McNamee/Getty Images)
By The Daily Caller News Foundation

Malcolm Abbott took to the street to defend his parents against allegations that they bribed college test proctors to inflate his sister’s college entrance scores, by strolling out the front door of his family’s multi-million dollar Fifth Avenue co-op and lighting up a blunt.

Abbott asserted in an interview with the New York Post that, while he didn’t attend college himself, “I believe everyone has a right to go to college, man.”

(RELATED: The Joke Is On Yale, Harvard And Other Elite Schools Cheapened By The Admissions Scandal)

“They’re blowing this whole thing out of proportion,” Abbott said between blunt puffs, before taking an opportunity to promote his CD “Cheese and Crackers.” Abbott raps under the name “Billa.”

His father Gregory Abbott, the founder of International Dispensing Corporation, and mother Marcia Abbott were indicted this week along with nearly 50 other parents for allegedly paying $125,000 to increase their daughter’s ACT and SAT scores. The New York couple was reportedly able to boost their daughter’s ACT score to 35 out of 36 and her SAT score to a perfect 800.

Malcolm Abbott’s brother also spoke with the Post on Tuesday about his parents’ legal troubles, lamenting that they “got roped into [this by] some guy who [expletive] cheated them.”

His parents are free on $1 million bail. They face federal charges of conspiracy to commit mail fraud and honest services mail fraud.