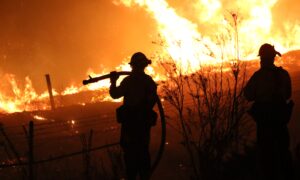 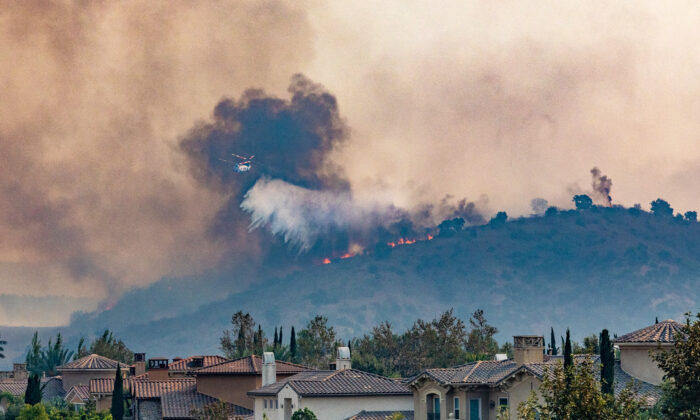 YORBA LINDA, Calif. (CNS)—Containment of the Blue Ridge Fire burning in Yorba Linda was at 80 percent on the afternoon of Nov. 1.

“Firefighters continue to make progress adding an additional containment line,” according to a statement from the California Department of Forestry and Fire Protection (Cal Fire). “Crews will work through the evening mopping up and patrolling the fire area.”

The charred area was revised downward from the 14,365 acres previously reported.

All evacuation orders and warnings were lifted on the morning of Oct. 29, and several highways were reopened.

Full containment is expected by Nov. 10, according to Cal Fire.

“More than 52 agencies have come to our aid,” Fennessy said.

Roads in the area were able to reopen on Oct. 29, Cal Fire said.

The brush fire, initially called the Green Fire, was reported at 12:55 p.m. on Oct. 26 next to the Green River Golf Club, off Green River Road and the Riverside Freeway in Corona, according to the Corona Fire Department.

The head of the fire entered Orange County about 1:20 p.m. on Oct. 26, and the flames raced toward Yorba Linda, posing a threat to hundreds of residences.

A grant from the Federal Emergency Management Agency (FEMA) was secured on Oct. 26 by Gov. Gavin Newsom, which will assist local and state agencies responding to the fire to apply for 75 percent reimbursement of their eligible firefighting costs.

Orange County Board of Supervisors Chairwoman Michelle Steel signed an emergency declaration on Oct. 27, and asked Newsom to sign one as well for the county to free up more funding.

Because of the wildfires, about 150 animals had to be temporarily relocated to the Santa Ana Zoo from the Orange County Zoo, located in Irvine Regional Park, due to evacuation orders. Animals were also being sheltered at the Orange County Fair and Events Center in Costa Mesa and at the Los Alamitos Race Course in Cypress.