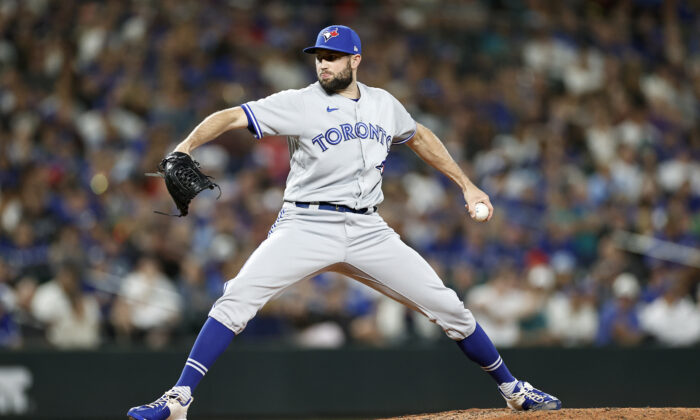 Tim Mayza (58) of the Toronto Blue Jays pitches during the eighth inning against the Seattle Mariners at T-Mobile Park in Seattle on July 8, 2022. (Steph Chambers/Getty Images)
Baseball

In a corresponding move, the Blue Jays recalled right-hander Trent Thornton from Triple-A Buffalo, and he will be active Sunday when the Blue Jays visit the Minnesota Twins in the finale of a four-game series.

Mayza sustained the injury during the sixth inning of Saturday’s game in Minneapolis as he tried to tag Nick Gordon at the plate on a safety squeeze play.

“If anything, he’s shown he’s resilient coming off injuries before and we’ll have him down the stretch,” Schneider said of Mayza, who left the clubhouse with his arm in a sling. “He’s been huge. Other guys have to step up in his spot for a little bit.”

He is 14–5 with one save and a 4.00 ERA in 226 career relief appearances with the Blue Jays. He underwent Tommy John surgery late in the 2019 season and missed the entire 2020 campaign.