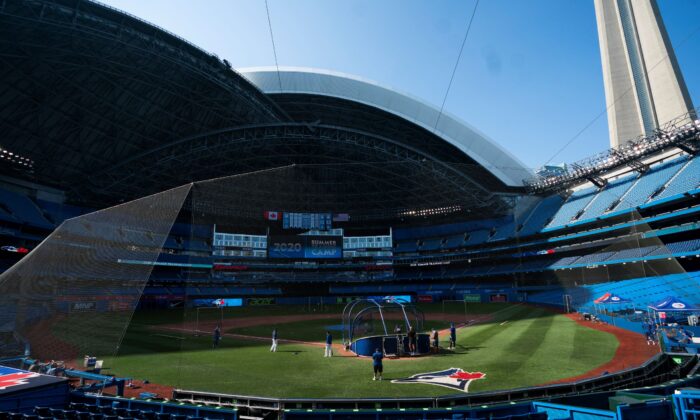 TORONTO—The Blue Jays can’t play home games in Toronto this season after the federal government rejected the club’s plan to use Rogers Centre on Saturday.

While the government gave the green light to the Blue Jays to hold training camp at their downtown facility during the COVID-19 pandemic without the normal 14-day quarantine for those entering Canada, Ottawa said no to a request to have a similar setup for Canada’s lone Major League Baseball team and visiting teams for regular-season play.

“However, unlike pre-season training, regular-season games would require repeated cross-border travel of Blue Jays players and staff, as well as opponent teams into and out of Canada. Of particular concern, the Toronto Blue Jays would be required to play in locations where the risk of virus transmission remains high,” Mendicino said in a statement.

“Based on the best-available public health advice, we have concluded the cross-border travel required for MLB regular season play would not adequately protect Canadians’ health and safety. As a result, Canada will not be issuing a National Interest Exemption for the MLB’s regular season at this time.”

The Blue Jays will be the lone MLB team not to be playing in their usual home stadium during the 60-game season, which starts next week.

Mendicino said the government remains open to discussion for playoff games at Rogers Centre if the risk of virus transmission diminishes.

“Canada has been able to flatten the curve in large part because of the sacrifices Canadians have made,” Mendicino said. “We understand professional sports are important to the economy and to Canadians. At the same time, our government will continue to take decisions at the border on the basis of the advice of our health experts in order to protect the health and safety of all Canadians.”

Ottawa turned down the Blue Jays’ plan, despite the fact Ontario approved it earlier this week.

The club hasn’t named its home venue for 2020 yet. Before the decision by the government, the Blue Jays said their spring-training facility in Dunedin, Fla., was their most likely venue for games if they couldn’t play in Toronto.