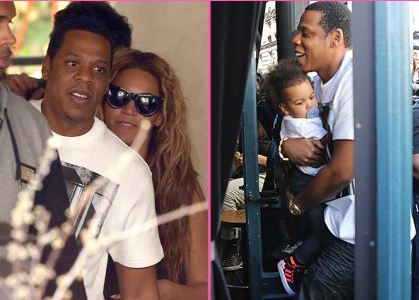 Jay-Z and Beyonce, and Jay-Z with Blue Ivy. (Screenshot/gossipcenter.com)
Entertainment

Blue Ivy in Paris with Beyonce and Jay-Z (+Photo)

Blue Ivy in Paris: Star couple Beyonce and Jay-Z were spotted in Paris dining with their daughter.

Blue Ivy is 15-months old. Beyonce is on a Mrs. Carter Show world tour, but has taken breaks recently, including to go with Jay-Z to Cuba for their wedding anniversary.

Beyonce told Shape Magazine that she absolutely wants to have more children. “I’ll probably start after this tour,” she said.

The French restaurant, Szptime, was one of the few places the couple has not shielded Blue Ivy from any photography, according to The Jasmine Brand.

“Well, it’s about time they stop trying to cover up this beautiful baby! She is adorable … really,” said a user on the website.