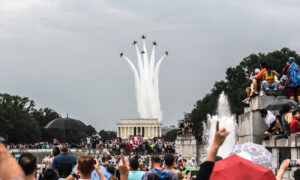 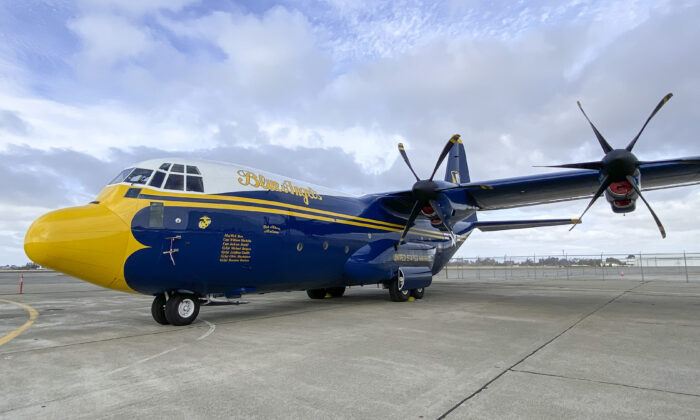 OAKLAND, Calif.—This year is the 75th anniversary of the U.S. Navy Blue Angels flight demonstration squadron, which performed airshows in San Francisco on the weekend of Oct. 8–10.

The Blue Angels return annually to the Bay Area during Fleet Week before Columbus Day. This year, two new airplanes have made their debuts: the F/A-18 Super Hornet jet and a C-130 transport aircraft known as “Fat Albert.”

U.S. Marine Corps Maj. Rick Rose flies Fat Albert for the Blue Angels. Rose, who is from Napa, California, told NTD Television he has been flying since 2014 and joined the Blue Angels two years ago.

“Fat Albert is kind of the Marine representation on the U.S. Navy Blue Angels squadron. So it’s a joint Marine–Navy squadron,” Rose said. “And then being a pilot to kind of represent that in addition to the C-130 community in the Marine Corps, it’s a very special community. It’s a small community, but what we do … the roles we play and the missions we do throughout the world are so important for Marines.

“But being a pilot on this aircraft is nothing short of an incredible experience every day.”

Even though the shows were canceled last year due to the pandemic, Rose said they still practiced at their home base in Florida and at other Navy air stations.

Rose said he’s humbled to perform before a home crowd to show Northern California what the team can do.

“Coming full circle, when I was a kid, watching the Blue Angels perform in the Bay Area was a special thing for me and I never thought in a million years I’d be now in the show performing, doing the same thing, inspiring future generations,” he said.

Fat Albert doesn’t have the typical sleek build of Blue Angels aircraft, and it can’t match their speed, but it’s still capable of doing all the stunts. This is Fat Albert’s 50th anniversary, but it’s the year the J model debuts, with six-bladed propellers, upgraded engines, and avionics.

“For each show site, we’ll carry the whole complement of six pallets of maintenance cargo in addition to about 49 sailors and Marines that are back there,” Rose said. “So we’re the logistics and platform to carry everything we need in order to make the show happen, and so getting six jets in the air is kind of surface level of all the teamwork that goes into making this happen. And we carry the Marines and sailors that fix the jets and make sure that they’re putting on a good show for us.”

He said Fat Albert is a critical asset for the Marines. The support team plays a major role in getting the aircraft off the ground and the show going.

Michael Donaldson, a power plant technician with the Blue Angels, told NTD Television: “Challenges are probably going to be long working hours, gripes on the jet that are difficult to figure out. But when we all get together and put our brains together, we figure it out.”

Because it’s a hand-selected process to be part of the team and many want to join, Donaldson said it’s the best of close-knit families and the teamwork is incredible.

The Blue Angels will head to Colorado, Texas, and Georgia for performances before returning to Florida.