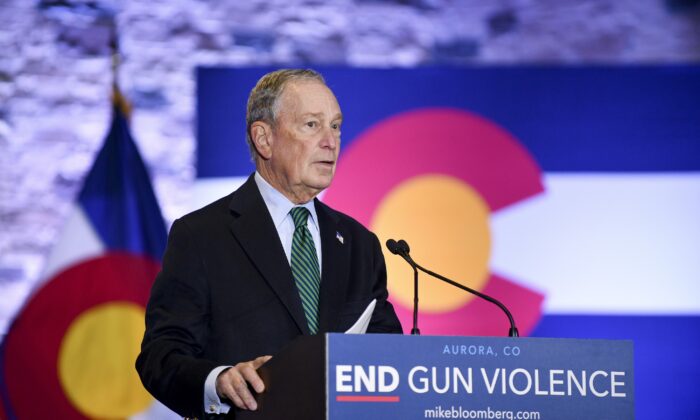 Democratic presidential candidate Michael Bloomberg unveiled a gun control plan this week that includes a ban on “assault weapons” and the requirement of every gun buyer to obtain a permit before purchasing firearms.

Bloomberg, who has poured millions into gun safety groups in recent years, is campaigning on his “track record of taking on” the National Rifle Association (NRA) “and winning,” his campaign said in the introduction to the plan (pdf).

“Mike’s candidacy is about getting things done,” it added. “That’s why he has offered a new gun safety policy proposal aimed at stopping the epidemic of gun violence in America. This comprehensive gun safety policy includes five key pillars designed to create an effective background checks system, keep guns away from people who pose a danger to themselves or others, protect young people in schools and Americans in their homes, tackle daily gun violence in the hardest-hit communities, and confront the gun industry head-on.”

In one of the strictest proposals released by a 2020 candidate, Bloomberg said that if elected he would require every gun buyer to get a permit before making a purchase through a combination of federal and state programs. His campaign said that 11 states already require people to get permits before buying new handguns.

The plan also calls for putting a mandatory 48-hour waiting period before buying a gun.

Like many Democratic candidates, Bloomberg wants to reinstate the federal ban on “assault weapons” and high-capacity magazines. The ban was in place from 1994 to 2004, with studies showing it had little effect.

Other portions of the proposal include formally declaring “the gun violence crisis to be a public health emergency,” appointing a White House gun coordinator, and passing a federal “red flag law” that lets law enforcement ask courts for the ability to seize guns from people who are reported to police by relatives or others who say they’re concerned about their well being.

“Mike would expand this system across the country—by opening federal courts nationwide to these petitions,” the plan states.

Bloomberg, 77, a three-term mayor of New York City, spoke about the plan Thursday in Aurora, Colorado, near a mass shooting site.

“I promise you I will never back down from this fight,” he told the audience. “That’s the kind of president this country needs and you deserve.”

The NRA shared clips of Bloomberg’s speech, calling it an “anti-gun rant.”

“He doesn’t believe gun ownership is a constitutionally protected right, and if elected, he’ll make sure you have to ask his permission before you can defend yourself,” said the group, which advocates for gun ownership rights and other gun-related issues.

It said in another statement: “Bloomberg wants gun registration and every oppressive/failed gun control scheme ever conceived. This hypocritical billionaire, with 24/7 armed guards, doesn’t believe self-defense is a fundamental human right or that gun ownership is a right as determined by the Supreme Court.”