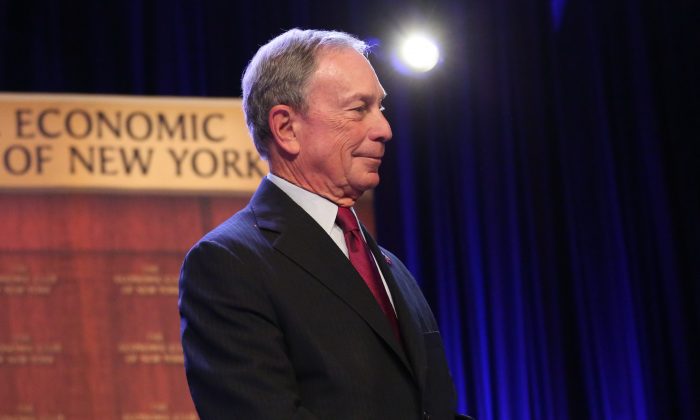 “Our country appears to be in the early stages of a growing fiscal crisis, that, if nothing is done, will extract a terrible toll on the next generation,” Bloomberg said of municipal pension costs.

The topic has come up in his conversations with mayors around the country Bloomberg said, and has already bankrupted cities.

Pension and benefit costs are “one of the biggest threats facing cities, because it is forcing government into a fiscal straight jacket.” Bloomberg said such a straight jacket means fewer services and less investment in the future.

Bloomberg said he tried to convince labor leaders to help reduce health care and pensions costs but had little success.

“Labor leaders are understandably determined to protect their members. That’s their job, and we understand that. They’ve done it exceptionally well.

“But it’s also the job of those in government and the public at large to protect our children, to protect the social safety net, and to protect future generations.”

Unfortunately, said Bloomberg, “the future that most elected officials worry most about is their own. Winning election, or re-election, is the goal around which everything else revolves. But we cannot afford for our elected officials to put their own futures ahead of the next generation’s, and to continue perpetuating a labor-electoral complex that is undermining our collective future.”

But necessity is causing mayors and governors around the country and in both parties to reconsider defined benefit pensions.

This, said Bloomberg, “is the first real sign of a crack in the labor-electoral complex that has traditionally stymied reform.”

“Our children’s future should never be sacrificed for our own benefit. That’s a simple idea—but in politics, it’s an awfully tough sell. People want benefits from their government—and they want them now.”

“And so in the years ahead, I will stand with mayors and others who stand up for the next generation by tackling this issue.”

Harry Nespoli, head of the Municipal Labor Committee, responded to Bloomberg’s speech in a statement.

“It is unfortunate that Mayor Bloomberg would use his last few days in office to blame unions yet again for the failure of his own administration. He should remember that the very people he blames for the city’s financial problems are the same people whom he lauds for keeping this the safest city in the world, working around the clock after Hurricane Sandy, and teaching our 1.1 million public school children.”