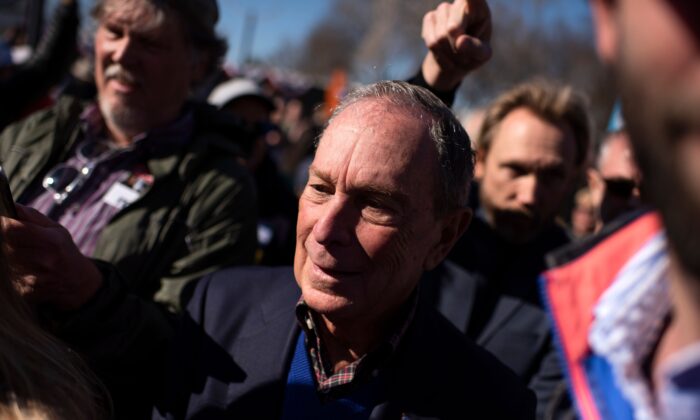 Bloomberg Says He Watched Debate, ‘Didn’t Learn Anything’ From It

Former New York City Mayor Michael Bloomberg said that he watched the Democratic presidential debate on Tuesday night but “didn’t learn anything” from it.

Bloomberg, 77, is a presidential contender but didn’t qualify for the debate stage because he’s largely self-funding his campaign; one of the two thresholds set by the Democratic National Committee was the number of donors.

Asked during a Wednesday morning appearance on ABC’s “The View” if he watched the debate, Bloomberg said “I did.” Asked for his thoughts, he quipped: “Best debate in 2020.”

“I didn’t learn anything, ‘he said she said.’ I suppose it’s good theater, but it didn’t address the issues of the country and what they would do. They’re not really debates, it’s precanned soundbites: everybody wants to say something that doesn’t get them in trouble, or does start a controversy that’s been pre-scripted and they think is good,” Bloomberg added.

When a “View” host said she wanted to see Bloomberg at the debate, Bloomberg said he wished he could have qualified.

Noting billionaire Tom Steyer qualified for the debate, a host asked if Bloomberg was trying to “take the easy way out.”

“No, because it’s harder to get the message out if you’re not in the debates. That gives you a lot of television exposure,” Bloomberg responded.

He said lobbyists weren’t interested in him when he was mayor of New York City because he claimed his immense wealth makes him impervious to that sort of influence.

“I do think that even if you took one dollar, it’s the look of it. I want people to talk about it: ‘This guy is incorruptible.’ And people say, ‘Oh well he’s just taking $2 million,’ it’s in one-dollar bills but it’s still $2 million,” Bloomberg said.

“And you sort of imply to people that you’re going to do something and later on if you want to change your views, you’ve already taken their money. I just think if you can afford to be self-funding, you should.”

Bloomberg, who has a net worth of $58 billion and has spent over $200 million on his campaign in just a few months, has faced criticism from rivals who have accused him of buying the election.

Bloomberg dismissed the concerns, using an argument he used when running for mayor.

“I’m doing exactly the same thing they’re doing, except that I am using my own money, they’re using somebody else’s money, and those other people expect something from them,” he said. “Nobody gives you money if they don’t expect something. And I don’t want to be bought.”