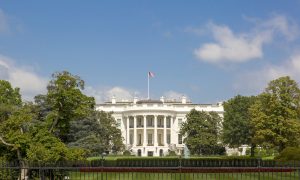 The Department of Labor building is seen in Washington in a file photograph. (Alastair Pike/AFP/Getty Images)
Politics

Bloomberg Law retracted an article that led to the resignation of a labor official in President Donald Trump’s administration more than one month after publishing the piece.

After a major backlash, the official was reinstated several days after resigning.

The situation unfolded in late August, when Bloomberg Law reporter Ben Penn sent an email to the Department of Labor about comments Leif Olson, the official, made on Facebook in 2016.

Penn wrote in the email, which was released after a Freedom of Information Request, that Olson “made a remark that references two anti-Semitic tropes” and wondered whether the department vetted Olson’s Facebook posts as part of his hiring, which took place earlier in August.

“Does the Labor Department find comments that are disparaging to Jews acceptable for a senior appointee?” Penn wrote in the email. “Why wasn’t Leif at least told to delete the post?”

The posts in question were made mocking post mocking Paul Nehlen, a Congressional candidate who lost badly to former Rep. Paul Ryan (R-Wisc.). Olson at one point said Ryan was Jewish, even though he’s Catholic.

Asked the next day what he meant, Olson told his Facebook followers: “I was talking about garbage like this, written unironically and featured, the night before Ryan’s 84-16 percent primary win, on the front page of what was, just a short time ago, a trustworthy source of opinion journalism.”

He then quoted a Breitbart writer who claimed that Ryan “has been brought to his knees, bowing down before the almighty nationalist populist movement, as his life’s work—a career in politics—flashes before his eyes.”

“It was sarcastic criticism of the alt-right’s conspiracy theories and anti-Semitic positions,” Olson added to Bloomberg, which sent the posts to the Department of Labor.

Penn sent screenshots of the original posts to the department but did not include Olson’s clarifications.

In a statement on Sept. 4, the department said Olson was reinstated.

“Following a thorough reexamination of the available information and upon reflection, the Department has concluded that Mr. Olson has satisfactorily explained the tone of the content of his sarcastic social media posts and will return to his position in the Wage and Hour Division,” it said.

After the reinstatement of Olson, Penn went dark, or stopped posting, on Twitter after he’d initially defended his article.

Bloomberg editors didn’t respond to requests for comment from The Epoch Times. Asked if officials felt misled by Penn, a department spokeswoman told Epoch Times there would be no further comments.

Bloomberg Law has retracted it’s faulty article on Leif Olson: “In reporting on a series of social media posts from [Olson], we failed to meet our editorial standards for fairness and accuracy. We regret that lapse and apologize to our readers and to Mr. Olson.”

Terry Hyland, one of the editors, wrote to Olson after his reinstatement and wondered whether “there was any pressure on you to step down … after we (Bloomberg Law)” asked the department about the Facebook posts.

Olson directed Hyland to the department, which directed him to its statement.

In an Oct. 4 statement, Bloomberg Law said: “In reporting on a series of social media posts from [Olson], we failed to meet our editorial standards for fairness and accuracy. We regret that lapse and apologize to our readers and to Mr. Olson.”