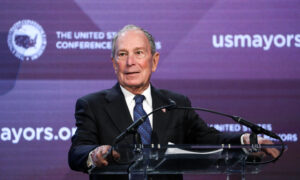 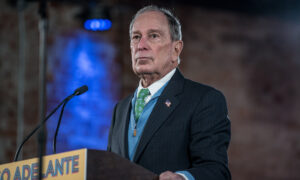 Former New York City Mayor Michael Bloomberg issued a statement after a five-year-old audio recording of him surfaced, in which he defended his administration’s stop-and-frisk policy.

The audio, released on Feb. 10, was recorded when Bloomberg spoke at the Aspen Institute in 2015. He acknowledged that the controversial policing policy disproportionately affected minorities, but defended it as a necessary measure to combat crime in New York City.

“But this issue and my comments about it do not reflect my commitment to criminal justice reform and racial equity,” Bloomberg, who is seeking the Democratic Party’s presidential nomination, said in a statement to news outlets on Feb. 11. “I believe we need to end mass incarceration, and during my tenure, we reduced incarceration by 40 percent and juvenile confinement by more than 60 percent.”

The audio was also highlighted by President Donald Trump on social media, who shared a Twitter post and called Bloomberg “a total racist.” Trump later deleted the tweet, according to reports. At the same time, some progressive activists have also seized on the leaked recording and offered criticisms.

Bloomberg addressed Trump’s comment and accused him of trying to divide Americans, before adding that he “inherited the police practice of stop-and-frisk, and as part of our effort to stop gun violence it was overused.”

“By the time I left office, I cut it back by 95 percent, but I should’ve done it faster and sooner. I regret that and I have apologized—and I have taken responsibility for taking too long to understand the impact it had on black and Latino communities,” he remarked.

In the leaked audio, Bloomberg said that about 95 percent of “murderers and murder victims” are minorities.

He continued: “People say, ‘Oh my God, you are arresting kids for marijuana who are all minorities.’ Yes, that’s true. Why? Because we put all the cops in the minority neighborhoods. Yes that’s true. Why’d we do it? Because that’s where all the crime is. And the way you should get the guns out of the kids’ hands is throw them against the wall and frisk them,” NPR reported.

Before he entered the Democratic presidential primary last year, Bloomberg apologized for the stop-and-frisk policy.

“I was totally focused on saving lives. But as we know, good intentions aren’t good enough. As crime continued to come down as we reduced stops—and as it continued to come down during the next administration, to its credit—I now see that we could and should have acted sooner, and acted faster, to cut the stops,” Bloomberg said last year, according to the New York Post.

“I can’t change history. Today, I want you to know that I realize back then I was wrong, and I am sorry,” he added.

Stu Loeser, the former mayor’s spokesman, told Long Island-based newspaper Newsday that Bloomberg made similar comments while he was in office.

“As he said hundreds of times, we need common-sense gun laws in Washington and policing focused on high-crime areas,” Loeser said in a statement to the outlet in 2015.