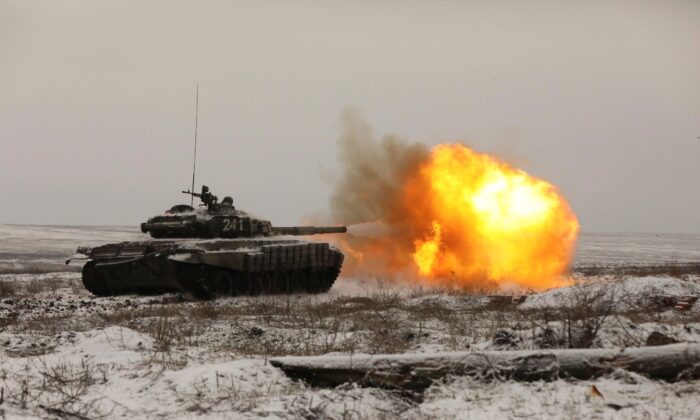 A Russian tank T-72B3 fires as troops take part in drills at the Kadamovskiy firing range in the Rostov region in southern Russia, on Jan. 12, 2022. (AP Photo)
US News

Bloomberg News apologized after it published and kept the headline “Russia Invades Ukraine” on its homepage on Feb. 4

“We prepare headlines for many scenarios and the headline ‘Russia Invades Ukraine’ was inadvertently published around 4 p.m. ET today on our website. We deeply regret the error. The headline has been removed and we are investigating the cause,” Bloomberg said in its statement hours after publishing the headline.

It’s not clear why Bloomberg had decided on Feb. 4 to prepare “Russia Invades Ukraine” as a scenario.

According to screenshots reviewed by The Epoch Times, the influential financial news website had a headline on the top of its homepage that read: “Live: Russia Invades Ukraine.”

A Kremlin analyst, Olga Lautman, told the New York Post that the headline was up on the front page for about 30 minutes.

“I went on the site and saw the breaking news but knew it wasn’t real because I deal with Ukraine and will be one of the first to know. It is bizarre and a pretty big mistake to make considering this is a potential large-scale invasion and everyone is on edge,” she said. Lautman also posted a screengrab of Bloomberg’s front page that showed the erroneous headline.

When one tried to access the story, it directed the user to a page that read, “500 Internal Server Error.”

The erroneous headline drew a response from chief Kremlin spokesperson Dmitry Peskov, who told the Russian TASS news agency that “it hardly was a provocation, there is no need to exaggerate it.”

“However, this situation makes it clear how dangerous such tensions are, which have been triggered by daily aggressive statements that we keep hearing from Washington, European capitals and London, because it is these statements, the deployment of troops near our borders and daily activities to pump Ukraine with weapons that lead to these tensions, and any spark is dangerous amid tensions,” Peskov said.

On Sunday, White House aide Jake Sullivan said that U.S. officials believe that Russia could invade Ukraine at any moment now, as tens of thousands of Russian troops remain positioned near the Ukraine-Russia border. Previously, Russia has denied wanting to invade Ukraine, but its top leaders have repeatedly demanded that NATO not allow Ukraine into the security organization—a demand the United States and NATO have rejected.

“We are in the window. Any day now, Russia could take military action against Ukraine, or it could be a couple of weeks from now, or Russia could choose to take the diplomatic path instead,” Sullivan said during a “Fox News Sunday” interview.