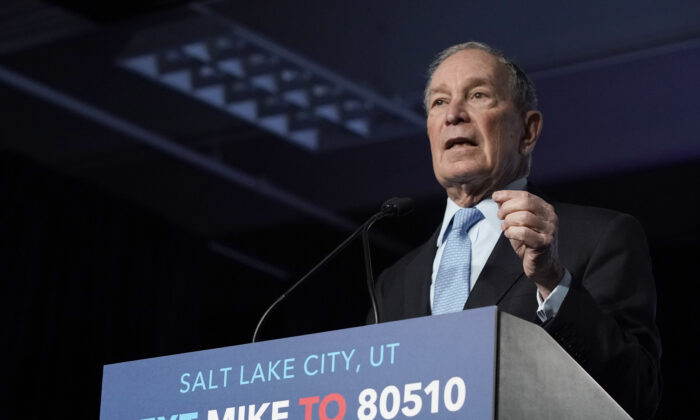 “The country can’t afford to let Bernie Sanders skate by another debate without a focus on his extreme record,” Galia Slayen, the Bloomberg campaign’s national press secretary, said in a statement to The Epoch Times.

“Mike is preparing for Tuesday’s crucial debate, and looks forward to taking part in CNN’s town hall on Wednesday.”

Bloomberg and Sanders, both 78, clashed at last week’s debate in Nevada. After Sanders said that billionaires are able to get by paying little in taxes, Bloomberg noted that the longtime federal lawmaker owns three homes.

“What a wonderful country we have,” Bloomberg said. “The best known socialist in the country happens to be a millionaire with three houses. What did I miss?”

Sanders said one of his homes is in Washington, where he works as a senator, and another is in Vermont. The third, he said, is “a summer camp.”

The former mayor said he lives in New York City and pays all of his taxes. He added that as mayor, he raised taxes on city residents.

After Bloomberg said he earned his money by working hard, Sanders jumped in, telling him: “Maybe it wasn’t you who made all that money. Maybe your workers played a part in that as well.”

Businessman Tom Steyer, who didn’t qualify for the last debate, will be back on the stage on Feb. 25.

South Carolina voters head to the polls on Feb. 29.

Sanders cemented himself as the Democratic front-runner over the weekend in Nevada.

Bloomberg hasn’t been on the ballots in the four early voting states of Iowa, Nevada, New Hampshire, and South Carolina, but he has begun mixing it up with rivals after largely avoiding them since announcing his bid for the presidency late last year. The ex-mayor’s atypical approach includes focusing on the raft of states slated to vote on March 3, including California, Arkansas, and Illinois.

Bloomberg has poured hundreds of millions of his fortune into his campaign while Sanders, like most other candidates, has sought donations from supporters. Sanders campaign spokesman Faiz Shakir urged supporters to donate on Feb. 24, telling them that the last few days before Federal Election Committee deadlines often see a fundraising spike and “we count on that in our budgeting and planning.”

Bloomberg would have been blocked from the debates due to a requirement to have a certain number of donors, until the Democratic National Committee removed that requirement on Jan. 31, allowing Bloomberg to qualify for his first debate in Las Vegas on Feb. 19.