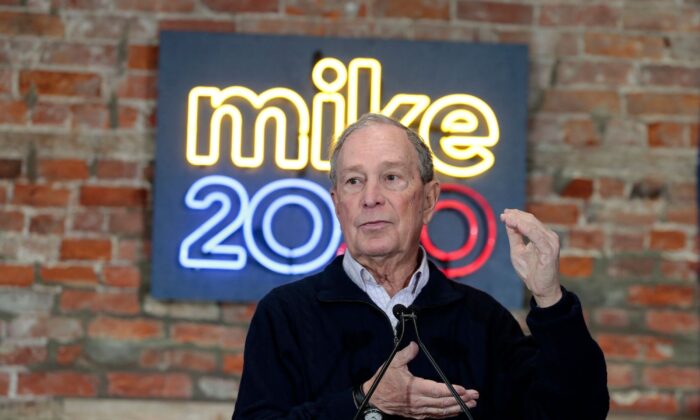 Michael Bloomberg speaks during an event to open a campaign office at Eastern Market in Detroit, Mich., on Dec. 21, 2019. (Jeff Kowalsky/AFP via Getty Images)
Education

Bloomberg rolled out the first part of his “All-In Economy” agenda on Wednesday. The plan includes a wide range of proposals that centers around stimulating job growth and increasing wages.

When it comes to education, Bloomberg told his audience at a community college on the South Side of Chicago that he would make “education and training a national priority” in order to better prepare workers for a rapidly evolving employment landscape. “Over the past few decades, technology has eliminated millions of good-paying jobs across our country, and that’s a trend that is continuing,” he argued, adding that American workers should be made ready for the emerging new jobs, rather than expecting the government to bring those old, diminishing jobs back.

Despite not giving specific figures or explaining how his plan will be financed, Bloomberg pledged to invest in “states, community and technical colleges and others” to build career-training systems and programs “providing skills and credentials employers identify as priorities for hiring for good jobs.” He said his vice presidential pick would be assigned to oversee the education reforms.

In his plan, Bloomberg makes general promises such as sending “billions of dollars” to “communities across the country to help create jobs and grow incomes,” as well as more specific ones, including enrolling one million students each year in apprenticeship programs by the year of 2030.

Bloomberg is not the first Democratic presidential candidate to call for investments in community colleges. former Vice President Joe Biden, Minnesota Sen. Amy Klobuchar, and former Maryland Rep. John Delaney all support making two-year community college tuition-free. IN his education plan, Biden proposed a program that is similar to the Obama-era’s America’s College Promise. In a federal-state partnership, the federal government would pay for 75 percent of the cost and states would cover the rest.

A more radical plan made by Vermont Sen. Bernie Sanders, dubbed “College for All,” would spend $48 million each year to make public colleges and universities tuition-free, make community colleges tuition-free, cut student loan interest rates in half, and triple funding for the Federal Work-Study program.