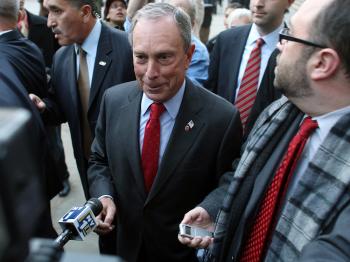 Joshua Philipp
Joshua Philipp is an award-winning investigative reporter with The Epoch Times and host of EpochTV's "Crossroads" program. He is a recognized expert on unrestricted warfare, asymmetrical hybrid warfare, subversion, and historical perspectives on today’s issues. His 10-plus years of research and investigations on the Chinese Communist Party, subversion, and related topics give him unique insight into the global threat and political landscape.
View profile
Follow
biggersmaller
Print
NEW YORK CITY—Mayor Michael Bloomberg may serve a third term in office, adding another four years to his current eight years as mayor of New York. After much debate, the New York City Council passed a new measure that extends the two-term limit to three.

On Oct. 23, city council members gathered in City Hall to place their votes. The decision to extend the term limit was narrowly passed, with 29 for it and 22 against it.

Having knowledge of ins and outs of the stock market through his former career as a Wall Street trader, many Bloomberg supporters wanted the term extension for the self-made billionaire in hopes that his experience can steer the city through the global financial crisis.

In an Oct. 23 press release, Bloomberg gave his comments. “Today, the majority of the City Council decided to give the people of New York a fuller choice in the November, 2009 election,” said Bloomberg. “I believe that was the right choice, and I want to thank Speaker Quinn for her leadership.”

“Those of us who work on both sides of City Hall must now move forward with the important decisions that face us, particularly finding ways to soften the fallout from the economic downturn and balancing our budget as revenues decline,” Bloomberg continued. “We have a lot of work to do together to get New York through these tough times."

Some controversy has arisen over the term extension, as it opens the doorway for other officials nearing the end of their time in office to also run again in the coming elections. The starting point of those who voted for the term extension is also under question, as of the 51 city council members who voted, close to two-thirds of them would have been facing the end of their second term with the coming of the 2009 elections.

Many officials have expressed their disapproval about the term extension, and some had announced that they would challenge it in court. Council Members Tony Avella and Annabel Palma had introduced Resolution #1640 in hopes to deter the decision. The resolution asked the State Legislature to amend the Municipal Home Rule Law so that it would give the city the ability to provide in its Charter that a change to the term is subject to voter referendum.

In an Oct. 5 press release, Avella said, “If this Council votes to amend the Term Limits Law without seeking a public referendum, it will go down in history as one of the most blatantly self-serving and autocratic acts of any legislative body in this city’s history.”

“This simply should not be allowed,” Avella continued.