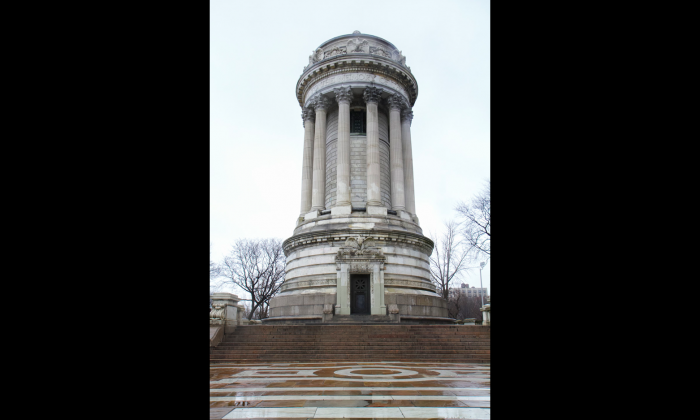 The Soldiers’ and Sailors’ Monument on Manhattan’s Upper West Side where Mayor Michael Bloomberg honored those who perished fighting in the American Civil War. (Benjamin Chasteen/The Epoch Times)
New York

NEW YORK—Veterans and patriots alike joined in honoring those who perished fighting in the American Civil War under a picture perfect sky at the Soldiers’ and Sailors’ Monument on the Upper West Side. The weather was a much welcomed changed following an unseasonable chilly and rainy Memorial Day weekend.

For the sixth year in a row, Mayor Michael Bloomberg delivered a keynote speech as a few hundred onlookers listened on with the hum of helicopters flying overhead. Bloomberg joked about the beautiful weather and how he would be catching a baseball game later in the evening before turning his speech to a more reflective side.

“There is a more serious side to Memorial Day, and unfortunately too many of us forget that,” Bloomberg said. “This is a day to remember our freedoms and start to think why we have those freedoms.”

World War II veteran Charlie Wallach, who lost his right leg while fighting in Germany, listened on. “To give your life for America, that is a big sacrifice,” Wallach said following the ceremony. “My buddies did not make it, so I am lucky.”

Bloomberg, who has never served in the military, said he cherished Memorial Day, a sentiment he noted dates back to his proudest childhood memory when he was chosen with a friend who had lost her father during World War II to lay a wreath at the town’s Memorial Day monument.

“I will never forget that,” Bloomberg said. “It was the first person I had ever known who lost a family member in war.” Bloomberg said his family explained to him at the time why it was necessary to send men overseas to fight in war.

World War II veteran Al Maher lost his brother at the Battle of The Bulge where he fought off a German offensive campaign. “We are not heroes. None of us are heroes,” Maher said. “The heroes still lay over there—my brother and the rest of them. It is a very important day to me. I feel they finally got a little recognition.”

In this his 12th—and almost certainly his last—Memorial Day as Mayor of New York City, Bloomberg joked one of the perks of his job has been to be on stage and speak at events such as this. But he said don’t count him out for next year. Bloomberg said to “rest assured” he would be in the crowd next year.