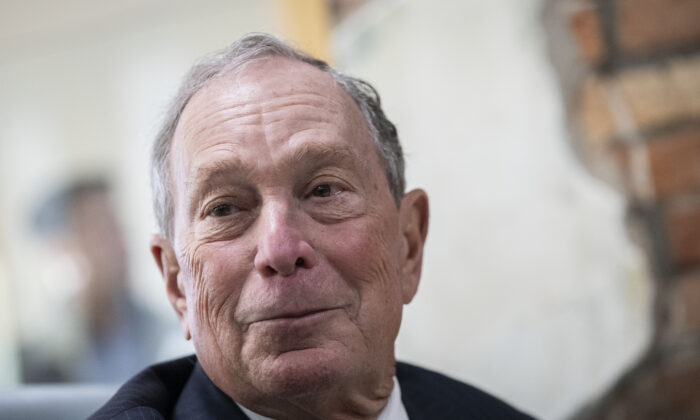 Bloomberg Has Spent Over $200 Million on 2020 Campaign

Democratic presidential contender Michael Bloomberg has dropped over $200 million on his bid for the presidency, outpacing most rivals and putting up almost as much money alone as the rest of the field has.

As of Friday, Bloomberg’s spending surpassed $200 million while the rest of the field has spent $222 million combined, Advertising Analytics said.

Bloomberg, 77, and fellow billionaire Tom Steyer, 62, have spent the bulk of the money in the race.

Kantar Media said the total spending on television advertisements through this week showed Bloomberg on top with $153.1 million and Steyer second with $116.5 million.

Bloomberg has been spending heavily since before entering the race in November 2019, blanketing the airwaves in dozens of states after his late entry. He’s taken an unconventional path, essentially ignoring the four early voting states and focusing on voters who will cast their ballots later in the primary. He’s also not expected to qualify for any debates because he isn’t’ seeking contributions and one of the two thresholds revolves around the number of donations.

“The typical [TV] market increased their rates by 22 percent as the political spending poured in,” the firm said last month.

“Houston was among the markets that responded most actively to the new advertiser. This is partially attributable to Bloomberg’s $1 [million] buy increasing the political spending in the market tenfold. This shock spending increase was matched by a 45 percent increase in rates, which is among the highest of any market.”

Bloomberg has a net worth of $54 billion. A campaign spokesman told the New York Post last year that Bloomberg would spend “whatever it takes to ensure that Donald Trump is not re-elected.”

Campaign officials said this week that Bloomberg would continue spending money even if he doesn’t win the Democratic nomination.

“Mike Bloomberg is either going to be the nominee or the most important person supporting the Democratic nominee for president,” Kevin Sheekey, Bloomberg’s campaign manager, told NBC. “He is dedicated to getting Trump out of the White House.”

Bloomberg has already spent $10 million in donations to House Democrats.

Hawkfish, a digital company that Bloomberg founded, has been tasked with advertisements for the campaign. The firm will be employed by the campaign through election day, campaign officials said.

Rivals have repeatedly denounced the major money Bloomberg and Steyer have poured into the race, but Bloomberg dismissed their concerns during an interview last month using an argument he used when running for mayor.

“I’m doing exactly the same thing they’re doing, except that I am using my own money, they’re using somebody else’s money, and those other people expect something from them,” he said. “Nobody gives you money if they don’t expect something. And I don’t want to be bought.”