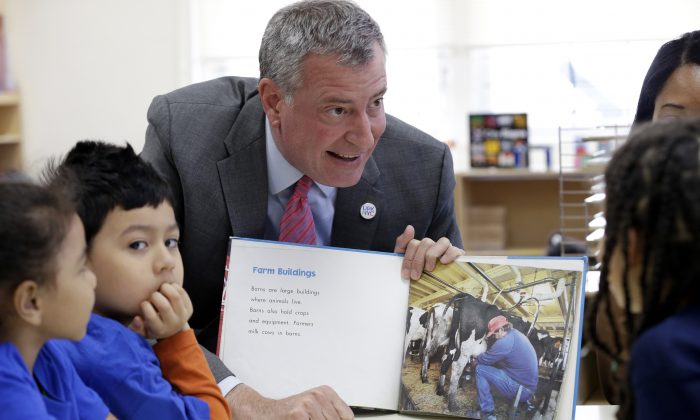 EarlyLearn, launched in 2012, is a financially struggling early education program serving over 30,000 children, mostly 3- and 4-year-olds. One of its main selling points is its high quality instructors, and the education they offer to low-income and working families.

The mayor said his pre-K expansion would require 2,000 new teachers, with 1,000 starting this September. EarlyLearn providers now see their teachers going for these jobs, as pre-K, especially the locations operated by the city’s Education Department (DOE), offer 30 to 40 percent higher salaries, shorter work hours, summer vacation, and other benefits.

Due to competition for the better paid jobs, providers are afraid they’ll lose the most capable teachers, and face an uphill battle to keep up morale for the rest.

The idea of EarlyLearn came in 2005 when the administration decided early care programs in the city needed a quality boost. “In some family child care programs in people’s homes, toddlers whiled away large chunks of their first years watching videos,” states the summary of a CNYCA report due to be released in two weeks.

It took another seven years, but sure enough, in the fall of 2012 the city pooled federal, state, and local funding streams and launched a $486 million initiative.

In return for the city contract, providers had to use “scientifically tested curriculum,” provide teachers 6 to 12 days of professional development a year, provide family support, and screen children for disabilities. They also had to make their programs full day, 8 to 10 hours, and keep their doors open during the summer.

“The idea and the prospect of what they planned to have happen are great,” Jinny Zhong, program director at Hamilton-Madison House, Inc. told CNYCA.

But major flaws came out in the wash. Many providers were unable to keep up with the new requirements and lost their city contracts. Those who managed to comply soon realized the city had grossly miscalculated funding and the per pupil money was not enough to cover the costs.

“They came up with a good model but they forgot to fund it,” said Michael Zisser, executive director of University Settlement, a nonprofit providing early care in Brooklyn and Manhattan, cited in the report. “You can’t pay for the things you signed up to do with the money you were given.”

Larger providers were able to absorb the costs through private fundraisers, but smaller ones now operate at a deficit, some fearing they may have to shut down, the CNYCA report states.

Those who survived soon faced a new challenge. The source of their funding, the city’s Administration for Children’s Services (ACS), told them last fall it would no longer pay their insurance centrally, pushing tens of thousands in additional costs on the providers.

And then de Blasio came with universal pre-K. The initiative was welcomed, as it would boost funding for over 12,000 4-year-olds in EarlyLearn, transforming them to pre-K.

But what will happen to the other 18,000 children in the program when their best teachers leave for the better jobs?

EarlyLearn teachers are part of 6,000 day care teachers unionized under DC1707, which have been without a raise since at least 2007. With the launch of EarlyLearn’s new contract in 2012, instead of a raise, it made the teachers co-pay for their health insurance, effectively reducing what they were bringing home. Also, new teachers starting salaries were cut by 11 percent for the first two years.

That means a freshly graduated teacher still working on his or her state certification would start with a salary of $24,000. “All our teachers graduated with tons of student loans,” pointed out Maria Contreras Collier, executive director of the Cypress Hills Child Care Corporation.

De Blasio has promised to increase the pay to $50,000 for certified teachers with master’s degrees, but that only applies to pre-K teachers. That puts providers in a difficult position. How are they supposed to motivate their teachers when some of them are getting a 30 percent raise, while others are not?

Collier has already written two recommendation letters for her teachers. “It’s really, really heartbreaking,” she said. They’re applying for jobs with city’s Education Department, where they would start at over $50,000 and enjoy free pension and health plans, and a seniority pay rise almost every year under the United Federation of Teachers’ (UFT) contract.

The Mayor’s Office didn’t respond to a request for a comment on the matter.

There is some improvement in sight. DC1707 is about to enter contract negotiations with the city and will demand retroactive raises since 2007 and improved health benefits, according to G.L. Tyler, head of the union’s political action committee.

Tyler said a deal similar to what the UFT got is possible, which would mean a gradual pay increase over multiple years. Still, to match salaries and health benefits of public schools would cost $500 million a year, said Maria Benejan, associate commissioner of ACS Division of Early Care and Education. It’s unlikely the city would spend such an amount to put up with a relatively small union.

EarlyLearn bears similarities to pre-K, but there are major differences. What are its pros and cons?

Age flexible EarlyLearn serves children from 6 weeks to 12 years of age. In reality though, some 80 percent are 3- and 4-year-olds. Toddlers are usually served by in-home Family Child Care providers.

Real full-day Contrary to universal pre-K, that runs for 6 hours and 20 minutes, EarlyLearn serves children for 8 to 10 hours a day.

Summer instruction The program runs through the summer.

Cons
Not for everyone The program primarily serves low-income children. A family of four has to earn about $50,000 or less to be eligible.

Not free Parents have to chip in $12 to $120 a week for each child, based on their income.

Exhausting application Applying to EarlyLearn is not an easy task. The application is 30 pages long, according to one provider. In contrast, an application to universal pre-K is about one page long and can be done online.

SOURCE: Administration for Children’s Services and the Center for New York City Affairs

October 2012
EarlyLearn launched in New York City under Mayor Michael Bloomberg. It was the most significant effort in nearly 50 years to improve early childhood care for nearly 45,000 infants, toddlers, and preschoolers.

April 1
Department of Education announces a 50 percent jump in pre-K teacher applications compared to the previous year, close to 700.

May 27
De Blasio announces the opening of applications for 15,000 pre-K seats at Community Based Organizations.

May 30
The mayor announces 10,400 new pre-K seats at Community Based Organizations.

SOURCE: Office of the Mayor