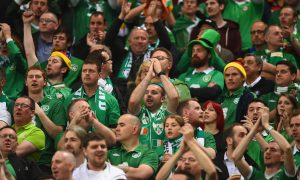 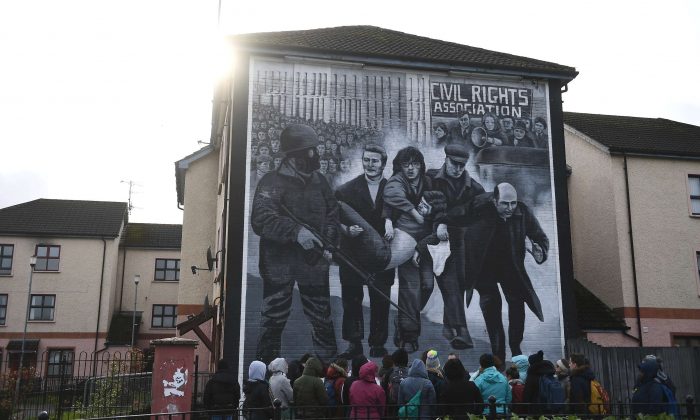 LONDON—A former British soldier is to be charged with murder for killing two people more than four decades ago in Northern Ireland on what would come to be known as Bloody Sunday.

British soldiers opened fire at a protest march in Londonderry, Northern Ireland, on Jan. 30, 1972, killing 13 people and injuring 14 others. Another person later died in the hospital from his wounds.

The man, known only as Soldier F, has been charged with the murders of James Wray and William McKinney and the attempted murders of Joseph Friel, Michael Quinn, Joe Mahon, and Patrick O’Donnell.

James Wray was 22 when he attended the march. He was shot while running for cover after the soldiers opened fire. According to the Saville Inquiry, Wray was unarmed and was shot a second time while he lay there dying.

William McKinney, 27, was shot in the back while fleeing the police.

The day came to be known as Bloody Sunday, one of the worst days of the Northern Ireland Troubles.

Soldier F has not been named because the Saville Inquiry stipulated anonymity for military witnesses. However, he could be identified when he is brought to trial.

“We are indebted to those soldiers who served with courage and distinction to bring peace to Northern Ireland,” Williamson said in a statement.

“And the government will urgently reform the system for dealing with legacy issues. Our serving and former personnel cannot live in constant fear of prosecution,” he added.

Eighteen other suspects, including 16 former soldiers and two alleged Official Irish Republican Army members, will not be charged, according to Northern Ireland’s Public Prosecution Service.

A ‘Long Road for the Families’

“It has been concluded that the available evidence is insufficient to provide a reasonable prospect of conviction,” said the Director of Public Prosecutions, Stephen Herron. “In these circumstances, the evidential test for prosecution is not met.”

Herron said his team had met with the families of those killed on Bloody Sunday to help them understand the reasons behind the decision not to prosecute the majority of the suspects.

“I am mindful that it has been a long road for the families to reach this point and today will be another extremely difficult day for many of them,” he said.

“Much of the material which was available for consideration by the inquiry is not admissible in criminal proceedings, due to strict rules of evidence that apply,” Herron said.

“As prosecutors, we are required to be wholly objective in our approach. However, that does not mean that we do not have compassion for all those who are affected by our decisions.”

William McKinney’s brother, Michael, said many families would be disappointed in the lack of prosecutions.

“We are mindful of those families who received that news today, and believe me, there are many,” he told the BBC.

“For us here today, it is important to point out that justice for one family is justice for all of us.”

The first public inquiry, held soon after the deaths in 1972, mostly cleared the soldiers of wrongdoing. It was called a “whitewash” by the victims’ families.

A second inquiry, ordered in 1998, took 12 years, concluding that the deaths were “unjustifiable” and the soldiers had “knowingly put forward false accounts” to explain the killings.

British Prime Minister David Cameron apologized for the deaths following the publication of the report.

The anger stirred up following Bloody Sunday led to an increase in activity from the Provisional Irish Republican Army, becoming a war of attrition against the British until the mid-1990s when a ceasefire was drawn up.

The conflict as a whole accounts for an estimated 1,800 deaths, the majority of them British security forces.