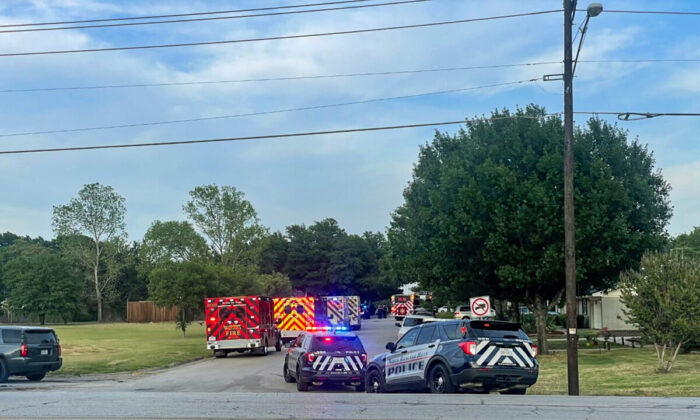 Law enforcement work the scene where multiple shots were fired near the area of Cedarcrest Drive and Diamond Oaks Drive in Haltom City, Texas, Saturday, July 2, 2022. (James Hartley/Star-Telegram via AP)
Crime and Incidents

Major cities across the United States saw a violent Fourth of July weekend, with reports saying that at least 50 people were shot in Chicago, while children were hit by gunfire in Houston and Baltimore, one fatally.

Authorities told NBC Chicago on July 4 that nine people were fatally shot across Chicago over the weekend. Last year, more than 19 were shot and killed and 100 more were injured during the same time period.

That included a mass shooting in Chicago’s Parkway Gardens in the 6500 block of South Martin Luther King Drive on the morning of July 4, according to officials. A 17-year-old was among those who were shot, authorities said.

Officials in Indianapolis told WISH-TV said that 11 people were shot in 10 incidents over the weekend.

Meanwhile, the Baltimore Police Department said it is investigating separate shootings in the city that left two dead and nine others wounded or injured over the weekend, according to WBAL.

A 14-year-old boy was injured in one of the shootings, officials told the Baltimore Sun. Police say the boy, who wasn’t identified, was hit in the hip at around 4 p.m. while he was in the backyard of a home.

In Houston, a 5-year-old was killed in a drive-by shooting that also left an 8-year-old injured in the Greenspoint neighborhood, police told ABC13.

From late on July 1 through July 3, there were 24 shooting incidents across New York City, officials told PIX11. That’s a 60 percent increase over last year, when 19 people were shot.

The St. Louis Metropolitan Police Department said that at least 16 people were shot, including five dead, since July 1, according to KMOV.

Two children were among six people who were wounded on July 2 in an apparent drive-by shooting, police in eastern North Carolina said. Officers responded to a home for a report of shots fired around 9:30 p.m., the Clinton Police Department said in a statement. They found six people with apparent gunshot wounds.

A preliminary investigation suggests that suspects arrived in a car and drove past the home, where people were gathered outside. They circled the block and then opened fire toward the home, striking the victims in what appeared to be a targeted attack, according to the statement.

Last year, the FBI said that homicides in the United States in 2020 increased nearly 30 percent over the previous year, representing the largest single-year jump since the agency started keeping track of such statistics.

Homicides and non-negligent manslaughters climbed an estimated 29.4 percent to 21,570, an increase of 4,901 over 2019, FBI data showed. It’s the highest estimated total since the early 1990s, when homicides stayed above 23,000 a year as drug wars played out in many places in the United States.